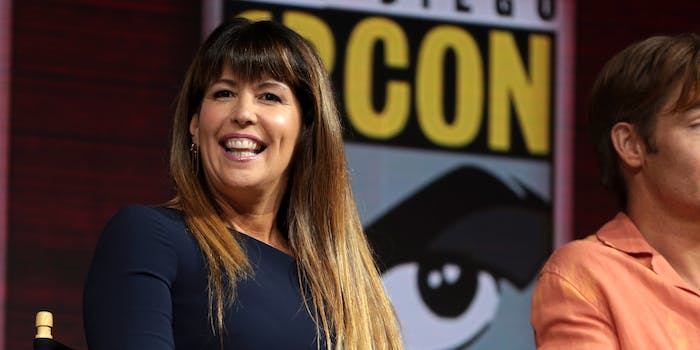 She had to fight for pay equal to her male peers.

Following the massive success of Wonder Woman, director Patty Jenkins nearly walked away from the sequel over salary disputes with Warner Bros.

Jenkins dished about the unexpected mini-scandal on a recent episode of MTV’s Happy Sad Confused podcast. Warner Bros. had only contracted director Jenkins for one movie, and since her original paycheck was for a mere $1 million, she wanted a lot more money for the sequel.

It was a clear example of how women filmmakers are treated in Hollywood: Warner Bros. seemingly didn’t think it was worth contracting Jenkins for more than one movie in advance. Women directors are often replaced after making the first film in a franchise (Catherine Hardwicke on Twilight, Sam Taylor-Johnson on Fifty Shades of Grey), and there’s a well-known gender pay gap in the industry.

As a result, Warner Bros. wasn’t able to announce Wonder Woman 1984 as quickly as audiences assumed. The studio had to get Jenkins to sign a new contract, which involved extensive salary negotiations. Jenkins admitted she came close to quitting the sequel because she felt undervalued after Wonder Woman‘s success.

“I started to walk away,” she told Happy Sad Confused. “I was going to walk away. I even said, ‘I would be happy to go to another studio and make a quarter as much because it’s not a sequel on principle.'”

Jenkins added that she didn’t want the salary negotiations to be a public news item, but she knew she had to stick to her guns. This all ties into her history in Hollywood. While Jenkins is now a massively successful blockbuster director (her next project is a Star Wars movie titled Rogue Squadron), her early career followed a sadly familiar trajectory for a woman filmmaker. Her feature film debut, Monster, was a low-budget drama that earned critical claim and won an Oscar for Charlize Theron. It came out in 2003, but Jenkins didn’t make another movie until Wonder Woman in 2017. In the intervening years, she directed a few episodes of TV shows like Entourage, Arrested Development, and The Killing.

It’s pretty common for women directors to make one movie and then struggle to find support for a second project, while their male peers go from success to success.

“It’s interesting as someone who never made any profit in my career up until Wonder Woman, that I was always at peace with it,” Jenkins explained, saying she was aware of being paid less than her male peers. But the commercial success of Wonder Woman ($821 million in global box office receipts) inspired her to demand better pay because she finally had leverage against a studio. If other superhero movie directors were being paid “seven times more” than her for similar work, then she deserved the same.

In the end, Jenkins signed on for a $9 million payday on Wonder Woman 1984. She hasn’t confirmed that she’ll return for Wonder Woman 3, a decision that hinges on whether the film will get a theatrical release.