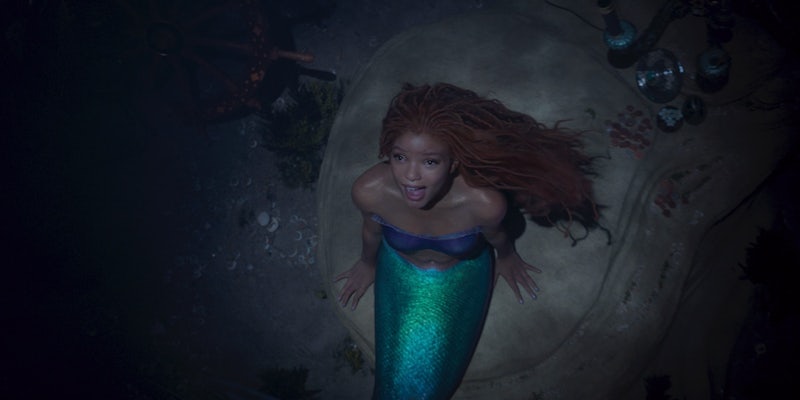 'I thought I’d show a thread of the little Black kids who are excited to see their favorite princess look like them.'

Since 2019, when Halle Bailey was cast as Ariel in Disney’s live-action remake of The Little Mermaid, white people have been losing it.

Why? Because Bailey is Black, and the Ariel in Disney’s animated The Little Mermaid—which was released in 1989—is white. But for many young Black girls and their parents, the decision to cast a Black singer and actress as the beloved Disney character was a welcome one.

Last week, Disney released the first teaser trailer for its much-anticipated film, which is set to release May 26, 2023. The new trailer, which shows a brief clip of Bailey singing under the sea, sparked a renewed racist backlash against her casting.

Social media discourse surrounding the movie and its main character has revolved around complaints that Bailey’s casting is “unrealistic,” while others question how one can “realistically” cast a fictional character in response.

One Twitter user decided too many people were focusing on the negative backlash and decided to show the positive reactions to the new trailer, particularly from young Black kids.

The user @normanination4 tweeted Sunday, “As I stroll on TikTok, I keep seeing parents video their children reacting to The Little Mermaid trailer. So instead of focusing so much on the negative, I thought I’d show a thread of the little Black kids who are excited to see their favorite princess look like them.”

The thread features about a dozen TikTok videos of young Black kids reacting with smiles and dazzled shock at Bailey’s appearance in the trailer. One child is seen laying sprawled on the couch as the trailer starts, but she immediately sits up and holds her heart when Bailey appears.

Other social media users have used their platforms to debunk arguments that Ariel “should” be white and explain why it’s important for Black kids to see a representation of themselves in major Disney characters.

One TikToker, a white man named Jaden Bricker (@jadenbricker), posted a now-viral video explaining why it’s “fantastic” that Bailey was cast as Ariel. As of Monday, the video garnered about 2.2 million views on TikTok.

In the video, Bricker points out that mermaids like Ariel are fictional creatures. They appear in the folklore of many cultures, including Europe, Asia, and Africa.

“Here’s where the source material of mermaids come from: the Mediterranean Sea,” Bricker says in the video, showing a map of the sea. “As you can see, we have Asia, Europe and Africa—which means that a mermaid could be literally any skin color.”

Bricker admits that Atlantica, the undersea kingdom of Ariel’s father, is in Denmark, according to Hans Christian Andersen’s original 1837 book. But the TikToker adds a fun fact for ignorant folks—Black people live in Denmark, too.

In Andersen’s novel, which Disney’s animated movie is based on, the author doesn’t mention Ariel’s race, Bricker adds. The author only says Ariel’s skin was as “clear and delicate as a rose leaf.”

“I personally want to know Halle Bailey’s skincare routine because she looks great,” Bricker says, showing an image of Bailey from the movie trailer.

In the video, Bricker counters another racist argument that several people have used online.

Some claim that people would be just as mad as they are over Bailey’s casting if a white actress were cast in Disney’s Mulan or The Princess and the Frog. The two films feature Asian and Black main characters, respectively.

But as Bricker points out, the stories of those two movies have “everything to do” with their race. Mulan is set in China and focuses its narrative on a Chinese woman. The Princess in the Frog is similarly rooted in the main character’s experience as a Black woman in 1920s New Orleans.

“Ariel’s race contributes fucking nothing,” Bricker says in his video. “The story isn’t changing. The original cartoon isn’t going to cease to exist once this movie comes out. You have your Ariel, it’s nostalgic for you. Stop being racist, and let young Black girls grow up with that same nostalgia.”

The Daily Dot reached out to Bricker via TikTok comment.