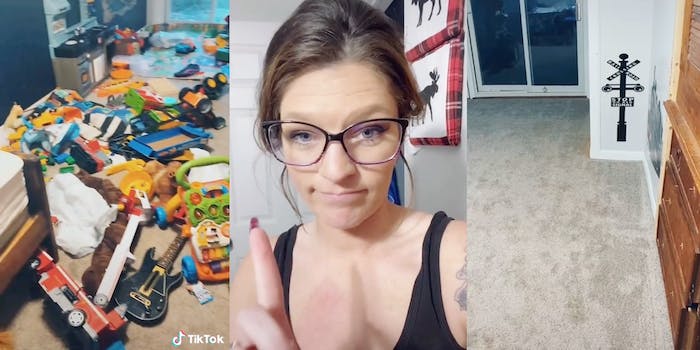 'Momma is not raising no disrespectful men.'

One mother’s harsh lesson for her 5-year-old who wouldn’t clean his room has TikTok viewers split on best parenting practices.

TikToker Tabatha Marie was frustrated that her young son refused to pick up after himself despite her repeatedly asking over the course of two days. But what she really didn’t appreciate was him apparently telling her to tidy up his room herself.

What followed was the TikToker filming herself dumping all of her son’s toys into trash bags. At the end of the video, his room is absolutely spotless—and devoid of anything to play with.

“Momma is not raising no disrespectful men,” she wrote. “It is not a ‘mommies’ job or ‘womens’ job to do anything. You make the mess, clean it up. You see momma struggling, help her.”

“My babies will learn this quickly,” she added.

The video has been viewed 3.4 million times since being posted to TikTok at the end of March. Some people praised the mother’s tough-love approach to parenting.

“People that don’t agree, also have the kids that don’t respect anyone, including their parents,” wrote @ksspirited.

Another user said that her mother did the same thing when she was younger, “and after that week with no toys I learned real fast to clean after myself.”

But a number of concerned folks claimed that 5 might be a little young to expect a child to clean a whole room by himself, and taking away every toy he owns as punishment may not be as productive as the TikToker thinks.

“That kid probably gets overwhelmed with the task at hand,” commented @the_indomitable_blackman.

“My mom used to do something similar at a very similar age,” @noahthepeach shared. “It traumatised me forever and in adult life cleaning is still an extremely stressful task.”

Ultimately, the TikToker pushed back on the criticisms in a followup video, saying that her son has cleaned his own room for a year and knows telling his parents that it’s their job to clean up after him is an inappropriate response.

“I think it’s really funny that you guys think I wouldn’t try and do activities with my son or try to offer help, clean the bedroom with him,” she said. “Thank you so much for ‘mom’-ing me.”

And while the boy’s room was still empty at the time of the followup, the TikToker said he’ll get his toys back when he earns them—but they’re hidden in the basement, not sitting on the curb waiting for trash day.