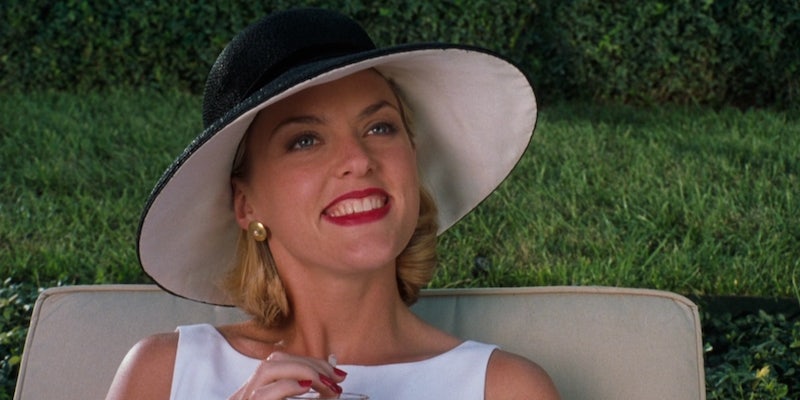 It's another embracing of a character once framed as an icy villain.

For some millennials, Disney’s 1998 Parent Trap remake is something of a cultural touchstone, and while there isn’t any word of yet another remake in the works, two of its stars did one better: They reunited to recreate one of their iconic scenes.

The Parent Trap introduced us to Hallie Parker and Annie James (Lindsay Lohan in a dual role), identical twin sisters who were separated after their parents Nick Parker and Liz James (Dennis Quaid and Natasha Richardson) split. Once they discovered this, Hallie and Annie decide to swap lives in an attempt to get their parents back together. While Chessy (Lisa Ann Walter), Nick’s housekeeper who also helped take care of Hallie, catches onto the scheme fairly quickly, there’s an even bigger obstacle: Nick’s fiancé, the fashionable publicist Meredith Blake (Elaine Hendrix).

The film absolutely frames Meredith Blake as the film’s villain. Her disdain for Nick’s daughter is palpable (she threatens to ship both Hallie and Annie off to Switzerland the moment she marries Nick), and despite the airs that she puts on, she’s mostly interested in Nick for his wealth. In the end, she loses Nick, who gets back together with Liz and reunites their family. But in recent years, the framework of how we looked at Meredith Blake changed. The traits that Meredith was vilified for in the film—not wanting children, being career-driven, and having a goal in mind and just going for it—are, for nostalgic millennials and younger viewers, now seen as aspirational.

With that, Meredith Blake, as well as Hendrix, have both become newly iconic; the latter leaned into it in 2018 when she threatened to ship all of us to Switzerland (and remains Hendrix’s pinned tweet). In a new TikTok video, Hendrix got back together with Walter to redo one of their key Parent Trap scenes together.

The original scene, which featured Meredith sitting on Nick’s lap, is devoid of Quaid himself. But it still works because he was more or less set dressing in that scene, which involves Hendrix ringing a bell to summon Walter. Walter gives her a Look before she breaks character to laugh.

And even though they may have butted heads in the film, Hendrix and Walter are lifelong friends. They took a road trip together a few years back, and the two frequently support each other on social media.

It’s not even the first time that Hendrix embraced the new take on Meredith Blake. In another TikTok video posted last month, Hendrix donned her Meredith Blake persona so she could “clear the air” about everything that’s been said about her, including those comparisons to Cruella de Vil—which she saw as a compliment.

Sure, Meredith Blake might not have gotten the man, but it’s evident that her character was in it for the long haul.