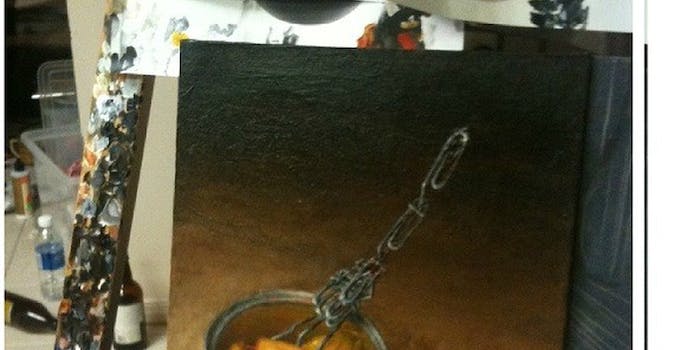 Only on Reddit would one man's picture of a paperclip fork be transformed into real art.

On Reddit, one man’s unwanted paperclips are another’s fork.

And, it turns out, one man’s paperclip fork is another’s art.

Last month, redditor hotsoop posted a photograph to the site’s pic section with the title: “Wife packed me a lunch for work… but forgot a fork. I had to improvise.”

The photograph showed hotsoop’s now Reddit-famous paperclip fork, stuck firmly into a can of fruit.

That post briefly made it to the site’s homepage where, it seems, it served as a bit of a muse for MrNnamdi.

Earlier today, with hootsup’s blessing, that redditor posted what he called a “surrealist” painting based on the photograph.

MrNnamdi’s post has become just as popular as the original — if not more so.

“I’m pretty color blind, so I like to work with tonal values first,” he wrote to the Daily Dot. “Color is only an afterthought; it’s the tonal values that make a painting.”

A high school student, he told the Daily Dot he learned to paint while at a so-called “re-hab bootcamp” last year. His parents sent him there for smoking pot, he said, which was “f*cking ridiculous, if you ask me.”

So, he taught himself how to paint, and found he was quite good at it.

Now he does paintings like this on the side. And, if his interactions with other redditors are any indication, he’ll be busy for a long time.

And after those paintings are done?

“Let the next wave of projects begin!” MrNnamdi wrote.