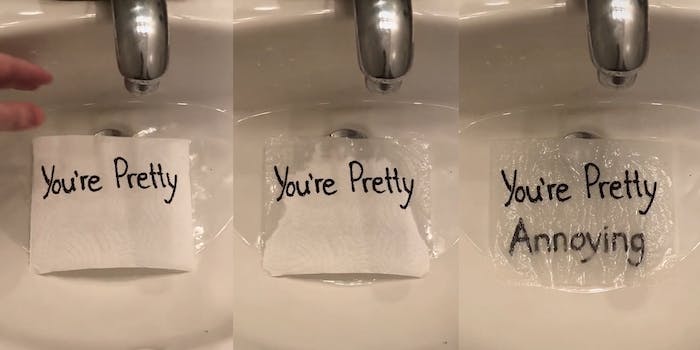 It's TikTok's take on invisible ink, and an old meme.

The TikTok paper towel challenge is one of those good, clean viral challenges that doesn’t involve head trauma or a visit to the emergency room. Hopefully.

The challenge involves writing messages on a paper towel that include a “surprise” ending, and letting them “develop” in water. It’s a riff on the sbeve meme, which is itself a riff on an older meme, and there were some traditional bait-and-switches.

And more topical takes, including what appears to be a reference to a rumor about Kent State “gun girl” Kaitlin Bennett.

Celebs have gotten in on the challenge too.

It does make you wonder how many paper towels have been sacrificed to the challenge. The current shortage in Australia was addressed in one video.