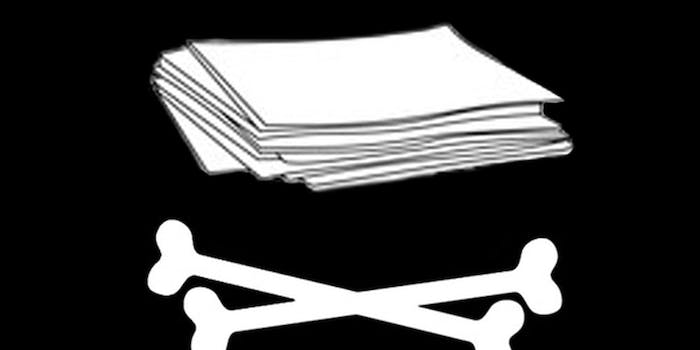 The Paper Bay launches in honor of Aaron Swartz

Jacques Mattheij's site is intended to level the playing field when it comes to access to academic papers.

Although Dutch programmer Jacques Mattheij initially began building it in 2007, The Paper Bay has remained dormant until recently. After the death of Aaron Swartz, Mattheij decided to finish and launch the academic paper sharing site.

“The shock of Aaron taking his own life under these enormous pressures,” he wrote, “has re-energized my dissatisfaction with the system and has made me realize that I should not be this passive. No longer content to be a bystander and to let others take the heat for whatever I perceive is wrong, I have decided that it is time to act, even if it is in a way that is not nearly as bold as Aaron’s.”

The Paper Bay allows those in search of specific academic papers to request them by name. If you possess this paper, you may upload it and the service will email it to the interested party. You may also upload a paper in your possession, yours or another’s, to “store” it in advance of any specific request.

The point, Mattheij told the Daily Dot, was to “allow non-academics, auto-didacts and people in poor countries to have full and open access to all scientific output.”

Given the trade in academic papers and test answers among the cheating classes, an issue that recently struck home in the allegedly ivory towers of Harvard, the thought occurred that such a free home for others’ work might be used by unscrupulous students to score grades beyond their capacity for intellection or hard work.

“Unlikely,” Mattheij responded, “since anybody in academic circles already has access and anybody in a lower school would be up against a teacher who presumably (a) does have access and (b) knows a lot more about the subject. Cheating by having access to more information is still cheating. After all, you still have to be able to discuss the content of your creation with you better, if you don’t understand what you’ve copied then you’re going to fall flat. But it’s an interesting angle and I had not considered it.”

Another concern was the aggressiveness with which government prosecutors and representatives from content-focused industries like music and film have pursued those who enable and take part in peer-to-peer sharing. From The Pirate Bay to Megaupload, law enforcement has come down like a ton of bricks. Given the size of the major publishers of academic journals, like Reed-Elsevier and MacMillan, and the money involved in paywalled, for-profit journals, there is no compelling reason to expect them to act differently.

Mattheij acknowledged it was a concern. However, “Unlike TPB and Megaupload I do have a ‘substantial non-infringing use’,” he said, “specifically all those documents that the publishers claim copyright to, but to which they don’t actually have the digital rights.This concerns the papers written up and until 1996, the time after that is the period when a writer could reasonably assume that if he signed over his rights that digital rights would be included.”

Additionally, Mattheij told the Daily Dot, because The Paper Bay has “significant restraint on the speed of the service (user-to-user) and because there are no download links I think I’m in the clear. My lawyer thinks so too.” Of course, that theory only gets tested out in one arena, the courts, which he hopes to avoid.

“This is a very tricky area with lots of conflicting opinions. The parties that I’ve spoken to are fairly unanimous in their support, [but] how much that is worth when the proverbial manure hits the fan remains to be seen.”

In time, Mattheij hopes The Paper Bay will become “a place where a community will form around free and open scientific knowledge, with a little luck a place where scientists will be more than happy to send their publications as a courtesy to those unable to afford access through the official (and pricey) channels associated with institutions of higher learning.”