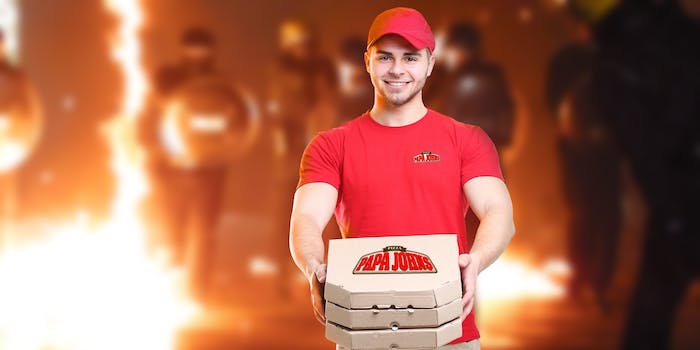 Vote with your conscience, eat with your fear. That's the Papa John's way.

In case you missed it, the quadrennial Republican National Convention is taking place. It’s a chance for conservatives to vilify Hillary Clinton while sidestepping policy in order to tout their nominee, Donald Trump, and his accompanying corn-husk VP pick, Mike Pence. This video pretty much sums up what’s been going on over the past few days:

While the nation watches with bated breath as Hitler 2: this time it’s Muslims begins to take shape, the country’s sense of horror is also accompanied with another kind of pang—that of hunger. At least, that’s what Papa John’s is banking on.

Market analysts are so convinced that the chaos of this election season will passionately compel voters to stay in, hunker down, and order a pizza that Papa John’s just had its stock upgraded as it looks toward November. It’s gone from the generic designation of “sector weight” to the body-shaming “overweight.”

Papa John’s fat stocks have continued to rise as America inches its way closer to the lapping flames of hell like a fresh pie thrust into a pizza oven. KeyBanc Capital Markets, which published a note on Tuesday regarding the stock upgrade, noted that the decline of our way of life (and dining in) means big business for delivery and pick-up joints like Papa John’s.

“After speaking with several large operators and industry contacts, we believe the recent decline in casual dining restaurant segment fundamentals—traffic down 3% to 5% the past several weeks—may be the result of consumers eating more at home amid the current political/social backdrop, which we believe could last through the November election,” KeyBanc states.

Vote with your conscience, eat with your fear. That’s the Papa John’s way.