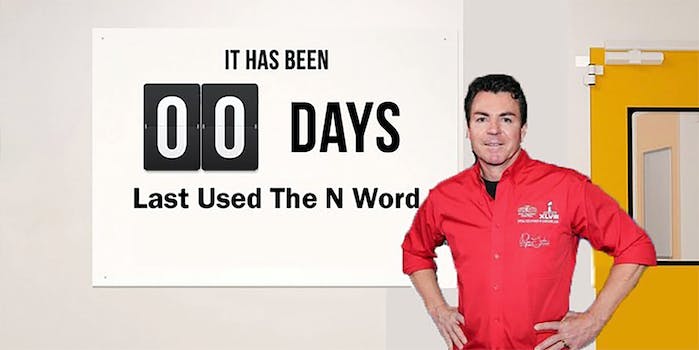 'My guy, how often are you saying that word, exactly, and to whomst?'

John Schnatter, Papa John’s founder, ex-CEO and the company’s namesake, did a One America News interview that went viral on Monday, saying that he’s been working to dispel accusations of racism that led him to step down from the company’s helm. However, he did so by saying that he’s been working for the last 20 months to rid his vocabulary of the N-word—which has led to a new round of speculation about his racism.

Schnatter was interviewed on the right-leaning cable news network, and as Philip Lewis shared in a tweet, a segment of the interview included Schnatter explaining what he was doing to combat public perceptions of him being racist, which he saw as fueled by the actions of the Papa John’s board.

“We’ve had three goals the last 20 months,” he stated. “To get rid of this N-word in my vocabulary and dictionary and everything else,” before going on a tangent about the Papa John’s board, while a chyron declared, “The depths of cancel culture.”

That led to this interpretation of a workplace safety sign from Dan Weiner, saying “it has been 00 days” since a Papa John’s ex-CEO “last used the N-word.”

Many on Twitter expressed amazement that Schnatter was having to labor at excising such an offensive word from his vocabulary for nearly two years — including a year spent in a pandemic.

Writer Roxane Gay observed, “If Papa John has spent the past 20 months working to rid the N-word from his vocab, my guy, how often are you saying that word, exactly, and to whomst?”

One tweet, from @mrfeelswildride, read, “Former Papa John’s CEO John Schnatter informs America he has spent the past 20 months in the Hyperbolic Anti-Racism Chamber, training at 10 times earth’s gravity to become less racist.”

Brooklyn Dad Defiant also had something to say, noting, “The CEO of Papa Johns said he was shocked that people thought he was a racist AND that it took him 20 months to purge the N-word from his vocabulary,” adding, “He said these things seconds apart.”

First, Schnatter blamed declining pizza sales on the NFL’s treatment of Colin Kaepernick and fellow players’ anti-police brutality protests, at a time when Papa John’s was a high-profile NFL sponsor.

Second, during an internal diversity training meeting that was taped and eventually leaked to Forbes, Schnatter reportedly used the N-word, explained as quoting Colonel Sanders of KFC fame.

Schnatter even, as the Daily Dot reported in July 2018, sought to sue the board, which led to the internet delighting in “Papa John’s Sues Papa John’s” headlines.

Though much of the Twitter focus was on Schnatter, one person wove in Monday’s other fast-food online controversy. Tying in Burger King saying “A woman’s place is in the kitchen” as the ill-advised first part of a two-part tweet for International Women’s Day, the tweet read, “Burger King is celebrating International Women’s Day just like how Papa John’s would celebrate Black History Month.”

And @mount_bees, who got the hat tip from Lewis for getting the video clip into online circulation, chided Mediaite by noting, “I didn’t volunteer to be the only person who watches OAN regularly” to not get credit for the video.