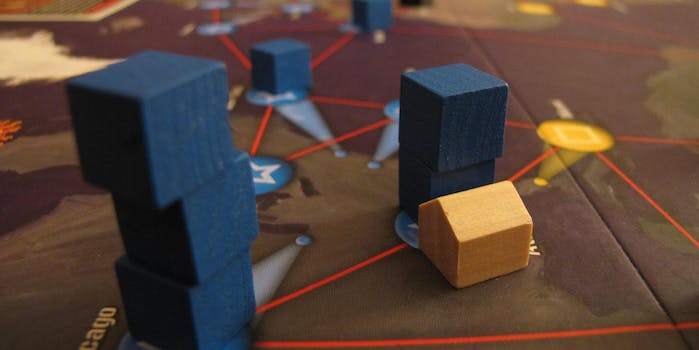 What happens when Ebola becomes a game

Our love for Pandemic in the face of the Ebola outbreak is a sign of how distanced we are from reality.

Right now on Amazon, a game called Pandemic is ranked the #2 best seller in the Collectible Trading Cards Decks & Sets category. Right now in Liberia, American troops are building a field hospital (18, actually) to help contain and treat an outbreak of Ebola. As a cultural critic, the juxtaposition makes me wonder: What are we playing at? Why is it fun—and don’t get me wrong, the sitting this one out.” Without backing, there’s no cure.

This isn’t a new story by any means, though it might take a board game and a new outbreak to reteach the principle. In 1966 (after decades of talking around the idea), the World Health Organization put both administrative muscle and serious money behind the goal of eliminating smallpox. It still took until 1980, with no naturally occurring cases since 1977, for them to declare that smallpox was eradicated.

So it takes patience—and I’m not sure we’re very good at that as a nation. One of the great cultural stereotypes is that Americans are all about instant gratification, right?

There’s an app version (of course) of the Pandemic board game now. You can use it in a multiplayer setting but you can also, as one person, control multiple roles. There’s an alarm klaxon that sounds every time an outbreak occurs.

It’s way more stressful to play alone than to play the board game at a bar with your friends—at least it is for me, so I rarely open up the app. The same challenge is there, but the anxiety is higher, and the collaborative payoff is missing.

And one thing about the game is made a lot more clear—you have to be lucky. One outbreak can shift the entire course of the game, can turn a near-win into a complete loss. Because there are multiple ways to lose Pandemic: More than seven outbreaks occur, there are no more disease markers available, there are no more cards to be drawn.

But there is only one way to win: The cures for all four diseases are discovered before any of the rest can happen. That’s fairly grim when translated into real life, and I am an incurable optimist if nothing else so it’s a painful lesson.

Pandemic was inspired, in part, by the spread of global diseases, and it seems to be human nature to grasp for something that gives us the illusion of control. At the end of the board game, we can push back from the table or we can set the game up to try again.

But that’s not true with Ebola in the real world. Pandemic may just be an updated Masque of the Red Death style distraction from the harsh realities of the world, a way to avoid what’s right in front of us.