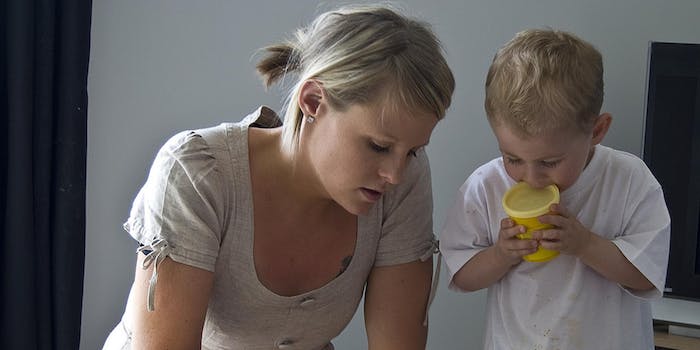 Earlier this month, John Oliver took on the topic of paid family leave as part of his Mother’s Day episode.

The video quickly went viral, as this is a galvanizing topic which was handled perfectly by Oliver. But the reason that the video was so widespread is mainly because of the surprising underlying principle—the U.S. is one of just nine countries in the world that does not offer some kind of paid parental leave.

Yes, you read that correctly. Out of 185 nations worldwide, only nine countries do not provide cash benefits to new parents. At first glance, these numbers might seem baffling: How can nearly two hundred countries offer better government care for new parents than the United States? As one of the wealthiest nations, shouldn’t America be leading the way when it comes to policies that support its families?

As Maria Schriver recently told NBC’s Meet The Press, “It’s inconceivable that we don’t have maternity leave.” And Hillary Clinton weighed in on the topic this week, saying: “It’s embarrassing. I traveled to 112 countries as your secretary of state. There are only nine countries that have no form of paid family leave and we’re one of them.”

Hillary: I traveled to 112 countries as SecofState. There are only 9 countries without parental leave policies & US is 1. It's embarrassing.

And yet American politicians continue to push back against mandating paid time off for new parents, saying that allowing employers the ability to choose whether or not to offer parental is fundamental to American values. But a closer look shows that lack of paid leave has a hugely negative impact on U.S. families—especially on mothers, who are the ones most affected by parental leave legislation.

1) New Parents only get 12 weeks of leave… unpaid

Under the current federal law, parental leave is capped at 12 weeks. This means that employers are only required to hold a worker’s job for just under three months; if the employee needs more than that, they can be fired. And since parental leave is unpaid, families—especially those with single mothers—often face an enormous dent to their monthly income if a parent takes time off when their child is born.

This means that often women don’t even have the choice when it comes to taking maternity leave. They go back to work early or even right away because they just plain can’t afford not to.

2) Most mothers don’t even have access to unpaid leave

There are strict rules surrounding who is and isn’t eligible for parental leave. Employees must be full-time, salaried, and have worked at the same company for over a year in order to qualify. These regulations mean that only a small percentage of new mothers are eligible for leave under the Family and Medical Leave Act.

3) Families have to make heartbreaking choices

Lack of access to paid leave means that parents often have to make incredibly difficult choices. Parents like Selena Allen, whose son, Connor, was born six weeks prematurely. Selena could only afford to take a total of four weeks off work and was faced with the decision of whether to use up that time while her son was still in the hospital—or to wait and take it once her son came home.

She decided that since Connor had around-the-clock care from doctors and nurses in the hospital, it made the most sense to take her leave once he was released. She gave birth on a Wednesday and went back to work the following Monday, only able to visit her son in the NICU on evenings and weekends.

Thirteen percent of new mothers experience postpartum mood disorders, which translates to half a million women per year  in the U.S. The “postpartum hormonal crash”—when estrogen and progesterone plummet in the first 48 hours after delivery—leaves mothers susceptible to postpartum depression, anxiety and psychosis. Sleep deprivation can have a huge impact on mental health, and exhaustion is an incredibly common experience even for mothers who are able to take parental leave. When you combine a 40-hour work week with the long, sleepless nights of caring for a newborn, the results can be brutal. Parental leave can help alleviate some of the stressors that contribute to postpartum mood disorders.

5) Infant health shouldn’t be a privilege

Studies show that the time parents spend with their newborns can have a positive impact on the baby’s health. “Skin to skin contact” (also known as “kangaroo care”) helps regulate the infant’s breathing, heartbeat, and temperature. Being present in the earliest days also gives parents the chance to learn how best to respond to their children’s cues, which can give them a better sense of when their baby is sick or hurting.

Under the current system, only relatively wealthy families in the U.S. are able to give their infants these kind of benefits, which is incredibly unfair. All kids deserve the healthiest possible start in life, no matter what their parents’ economic situation.

Senator Lamar Alexander, chair of the Senate labor committee, is one of many opponents to parental leave who believes that offering paid time off will somehow curb everyone’s liberty.

“Americans have great freedom when it comes to work—they can choose the career they like and negotiate with their employer for the things they need,” Alexander said recently said in reaction to President Obama’s proposal to give workers six weeks of paid leave. “One more government mandate, however well-intentioned, will only reduce those freedoms—making it harder for employees to find jobs, negotiate for the things they need, and open and run businesses.”

Considering that 40 percent of employees don’t even have access to unpaid leave, and often those who are eligible can’t take it due to financial reasons, it seems bizarre and completely out of touch to frame lack of paid parental leave as “freedom.”

A study conducted in California, one of the three states that mandates paid parental leave, shows that since the state implemented paid leave, 91 percent of businesses have reported either a positive or neutral effect on profitability. Mothers who take paid leave are more likely to return to their jobs, meaning that companies don’t have to pour resources into hiring and training new employees.

So legislating paid leave creates a good outcomes for both workers and employers. It’s a win-win scenario!

8) The U.S. is lagging way behind other countries

Not only is the U.S. one of only a handful of countries that don’t offer some kind of paid parental leave, they’re way behind when it comes to treatment of mothers in general. Save the Children’s annual State Of The World’s Mothers report places America 33rd in their ranking of how mothers fare around the world. This is because of factors like comparatively high maternal death rates in the U.S., high under-five mortality rates, and low representation of women in politics.

The report also compared infant mortality rates in the 25 wealthiest capitals around the world, and Washington, D.C., came in last place, with infants in the poorest wards dying at ten times the rate of infants in the more economically advantaged wards.

Many conservative politicians claim to be pro-family, but the truth is that their resistance to legislating paid parental leave is a firmly anti-family stance. Statistics clearly show that everyone benefits from paid leave: parents, babies, and even businesses. The ability to take paid time off after a child’s birth can mean the difference between financial stability and poverty.

If America wants its children to have bright, healthy futures, then one of the best ways to make that happen is to offer its workers a real choice when it comes to how they spend their child’s earliest days.