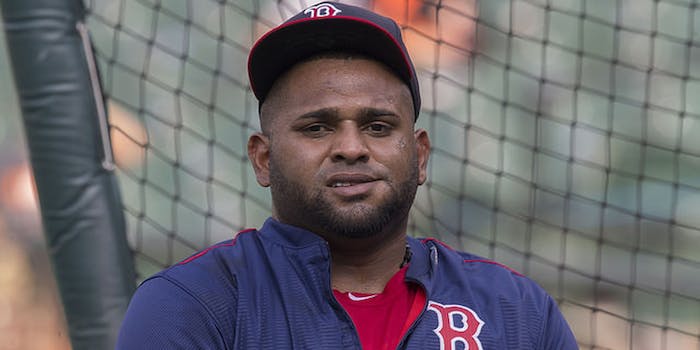 Instagram-loving Pablo Sandoval is a man of rich tastes.

Boston Red Sox third baseman Pablo Sandoval got into a bit of trouble this week when it was discovered that he was checking out his Instagram account while in the bathroom, which wouldn’t be a big deal except he was liking pictures of women in the middle of a game.

His team suspended him for a game, Sandoval apologized, and everybody pretty much moved on with their lives.

“I know I fucked up,” Sandoval said Thursday, via ESPN Boston. “I made a mistake [Wednesday]. I learned from that. I’m a human being, I made a mistake, so I apologize to my teammates, to the team, to the organization, the fans support.”

Though Sandoval has made his Instagram account private since the mini-controversy, we can imagine that he’ll continue to stay on Instagram and that he’ll continue to like things. For instance, women he finds attractive. But other than that, Sandoval is a complex man of many thoughts and many indulgences. Though we don’t have access to his Instagram at the moment, here’s what we’re almost completely positive that Sandoval finds more interesting than baseball.

Look, sometimes baseball players have to spend time on the toilet even in the middle of a game (if you’ve seen the postgame food spreads in the clubhouse, you could understand why), and dammit, they need something to look at while doing so. If Sandoval is liking women’s pictures on Instagram, he probably should just take the next step and move on to Tinder. Sandoval apparently isn’t married, so his browsing shouldn’t upset anybody. And as Sandoval always says (I imagine), “Swiping before wiping is a great way to pass the time.”

Last year, a foul ball from Sandoval smashed the computer of my buddy, Mark Sheldon of MLB.com. Here’s how it happened.

As far as I know, Sandoval never met with Sheldon. But it’s never too late for Sandoval to start making amends for a busted-up laptop.

(And if it’s not obvious, Sandoval’s nickname is Kung Fu Panda.)

Apparently, Sandoval was good at this when he was with the Giants, because when he left San Francisco for Boston, he said he’d miss only two of his former teammates. “Only [manager Bruce] Bochy,” Sandoval told Bleacher Report. “I love Boch. He’s like my dad. He’s the only guy that I miss. And Hunter Pence. Just those guys.”

No matter how much guff Sandoval has taken for this Instagram fiasco, it won’t matter much in the long run. That’s because, suspensions and Instagram journeying notwithstanding,  Sandoval has been and will always be a World Series MVP. 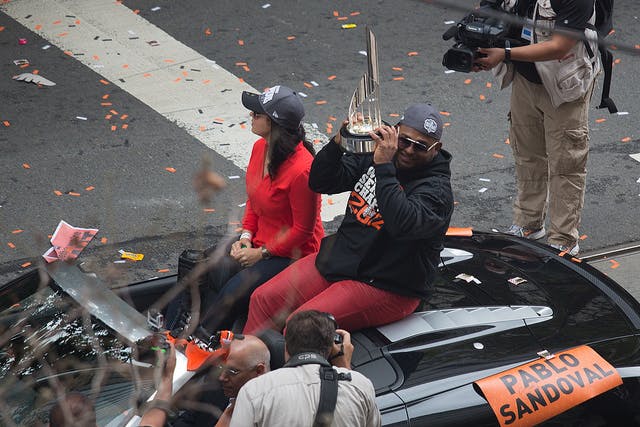