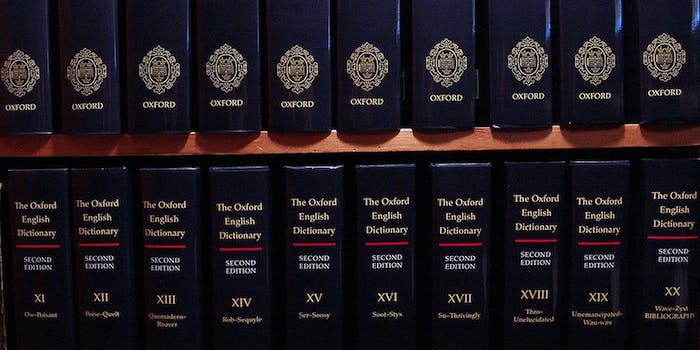 This month OED Chief Editor John Simpson noted the addition of the “noun and verb ‘tweet’ (in the social networking sense)” to the venerable reference book.

The Oxford English Dictionary, accepted arbiter of our elastic and ever-changing language, traces the verb “tweet” back to the mid-19th century. The oldest citation is from a poem by one G. Meredith, published in 1851.

“The little bird,” Meredith wrote, “tweets to its mate a tiny loving note.”

This month, in a “quiet announcement” at the end of his quarterly update, OED Chief Editor John Simpson noted the addition of the “noun and verb ‘tweet’ (in the social networking sense)” to the venerable reference book.

Words rarely find a spot in the dictionary so swiftly. Another new entry is “to have a cow,” which turns out to predate Bart Simpson by several decades. Oddly enough, “retweet” is already included, perhaps because it calls for its own entry and not the editing of a previous one.

There’s a transitive form as well: “To post (a message, item of information, etc.) on Twitter. Also: to post a message to (a particular person, organization, etc.).”

Two other additions this round were “crowdsourcing” and “e-reader,” demonstrating once again how technology creates lexical needs. The Internet, as always, will go on using and mutating language however it sees fit, developing highly localized dialects and often impenetrable jargon.

Indeed, with the OED bending its 10-years-in-use rule for new words (or definitions), it seems some editors have realized how much catching up is in order.