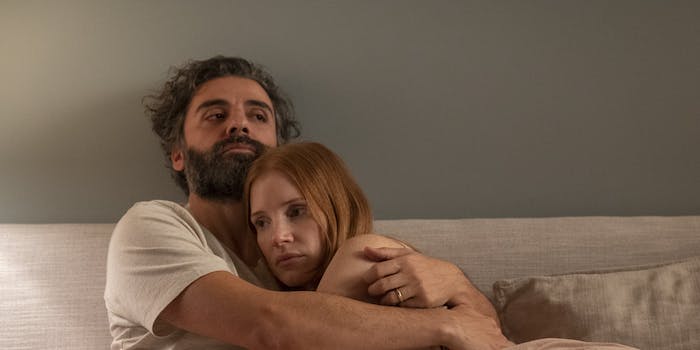 The two actors went viral due to their intimate chemistry on the red carpet.

A clip of Oscar Isaac and Jessica Chastain on the red carpet took Film Twitter by storm this weekend, prompting a discussion about sexual chemistry in modern cinema.

Chastain and Isaac were at the Venice Film Festival, promoting their new HBO miniseries Scenes from a Marriage. Reuniting after their critically-acclaimed collaboration in 2014’s A Most Violent Year, they’re playing (as you can probably infer from the title) another married couple. And while the series doesn’t look notably sexy, Chastain and Isaac definitely display a certain vibe. In this 52-second clip, we see Oscar Isaac give Jessica Chastain a smoldering look before kissing her arm, with the two actors embracing each other and laughing for the cameras.

The clip grabbed people’s attention both because film buffs love Chastain and Isaac, and because those 52 seconds displayed more charisma and sex appeal than we see in most mainstream Hollywood movies. As an on-screen couple, they emit an aura of old-school glamor and sensuality, with Chastain jokingly comparing Isaac’s arm-kiss to Morticia and Gomez Addams. When someone edited the clip to add “Yumeji’s Theme” from the iconically romantic film In The Mood For Love, it felt like a perfect fit.

In turn, this all tied into recent discussions about the sexless nature of contemporary American film. While some blockbusters still face criticism for sexualizing women in an exploitative manner (hello, Michael Bay), there’s also a growing sense that modern Hollywood is afraid of sex and romance.

The stars of Marvel movies—a dominant force in the industry—are ripped and gorgeous, but they rarely have compelling romantic arcs or sexual tension with their love interests. Meanwhile, the romance genre is a shadow of its former self. When romantic movies do get made, their stars rarely seem to have genuine chemistry, contrasting with the vibrant energy of romances from the 1930s, ’40s and ’50s. This phenomenon was pinpointed earlier this year in an article by RS Benedict, “Everyone is beautiful and no one is horny,” positing that the 21st century craze for superhero movies went hand-in-hand with the desexualization of mainstream cinema.

That Chastain/Isaac clip illustrates the way Hollywood fails to utilize sexual charisma—particularly in the case of Oscar Isaac, whose capacity for red-hot smoldering is typically kept under wraps. People are so unused to seeing this kind of chemistry that Twitter lost its collective mind over a Getty Images montage of two movie stars hanging out on a red carpet. And that reaction included speculation that Chastain and Isaac were having an affair. Some people seemed shocked that Isaac’s wife was nearby at the same event, laughing and smiling while her husband embraced his co-star.

This reaction definitely folds back into the “people have forgotten what sexual chemistry looks like” thing, because Jessica Chastain and Oscar Isaac… are actors! They’re promoting a project together! Part of their job involves pretending to be married on camera, and the other part involves using their star power to advertise that project. This doesn’t mean they’re sleeping together, any more than Daniel Craig goes around shooting people as practice for James Bond.

Something similar happened a couple of years ago with Bradley Cooper and Lady Gaga, who played up their romantic vibes while promoting A Star Is Born. The chemistry was real but it was also a central element of the film’s marketing campaign; a rarity in a Hollywood landscape where adult romances are few and far between. Their intimate Oscar night performance of the song “Shallow” had people speculating about an affair, but all that sizzling romantic tension evaporated once the film’s promotional tour was over. In subsequent interviews, Gaga said they were “fooling everyone” because “we wanted people to believe that we were in love.” Because, you know, they’re actors.