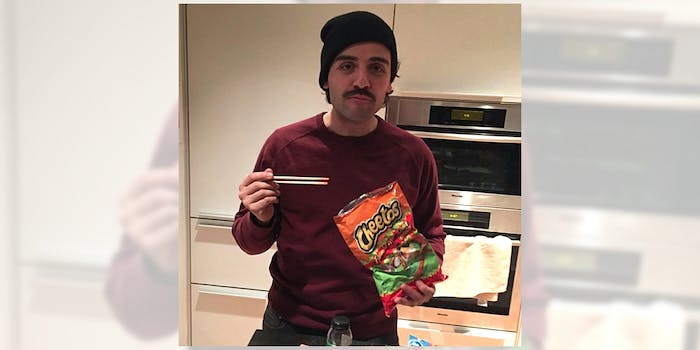 Oscar Isaac became a meme because he’s a ‘sophisticated gentleman’

In the Star Wars universe, Oscar Isaac plays a bold and rebellious Resistance pilot. But in real life, he’s just a guy who doesn’t want to get his hands covered in Cheeto dust.

When Isaac went on Jimmy Kimmel Live! Tuesday to promote his latest role in the upcoming sci-fi film Annihilation, he ended up getting questioned about a viral photo that shows the actor nonchalantly eating Cheetos with a pair of chopsticks. The photo, if you haven’t seen it, is spectacular:

There’s a lot to unpack here. Cold medication, a mustache, a beanie, and, of course, the chopsticks covered in flaming lime Cheeto dust. The photo became a meme when it hit the internet in early 2016—just when Isaac was starting to gain a dedicated fanbase from his Poe Dameron character in Star Wars: The Force Awakens.

Isaac was happy to explain his snacking behavior to Kimmel. “I’m a sophisticated gentleman, and I didn’t want to get the powder on my fingers, so I went for the chopsticks,” he said.

It makes perfect sense. Why aren’t we all eating Cheetos with chopsticks?

Kimmel also shared a few photos of people dressed up like Isaac eating Cheetos. Isaac said he realized the photo was a “big deal” when he started receiving boxes of flaming lime Cheetos at his home.

Watch the full interview below: