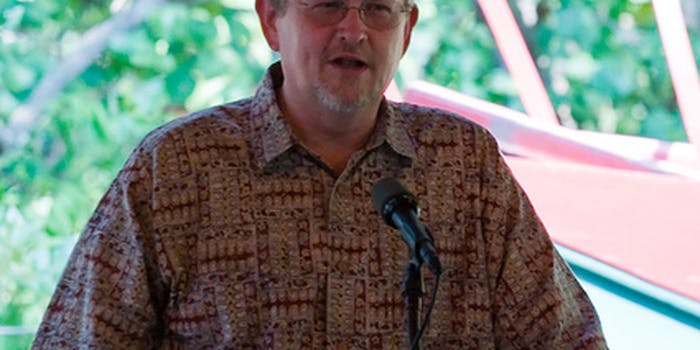 Talk about a mixed message.

Card used to be most famous for his 1985 sci-fi novel Ender’s Game. He has since become rather well known for his anti-gay pronouncements, especially a 2004 denunciation of gay marriage titled “Homosexual ‘Marriage’ and Civilization.” Julian Darius of Sequart described it as built around a “spectacular twist of logic that recalls anti-civil rights arguments from the 1960s.”

Card is a prominent member of the Church of Jesus Christ of Latter-Day Saints (also known as the “Mormons”). This is significant in that the once-polygamous denomination provided significant funding for the National Organization for Marriage, an anti–gay marriage group that fought to pass California’s Prop 8 and whose board Card joined in 2009.

There has been an outcry by many fans over DC’s hiring of Card. A petition to ask DC to “Drop Orson Scott Card!” has cropped up on the sexual equality organizing platform, AllOut. As of this writing, the petition has over 8,000 signers, with a goal of 10,000.

Others, including Bleeding Cool’s Rich Johnston and gay comic writer Dale Lazarov, expressed their opinions that agitating for someone’s sack because you disagreed with their views was problematic.

Lazarov, quoted in the Guardian, said, “I’ve known Orson Scott Card is a raging homophobe since the early ’90s. I refuse to buy or read his work. But asking that he be denied work because he is a raging homophobe is taking it too far. Asking for workplace discrimination for any reason is counterproductive for those who want to end discrimination on their own behalf.”

One of the dominant notes in this discussion is how “weird” the hire seems to many. Between societal shifts, like the acceptance of openly gay men and women into the U.S. armed services, and artistic ones, like the previously-mentioned gay Lantern, Batwoman (lesbian since 2006), as well as the first openly gay actor to play Superman scheduled to star in the new animated feature, it does seem weird. Given Card’s recasting of “Hamlet’s Father” as a predatory gay paedophile, one can hardly imagine the fate awaiting Jor-El.

But Card is a money-maker. His Ender’s Game series is considered by many to be a classic and by many others to be profitable. A feature film based on the first book and starring Harrison Ford is being released this year. DC and its owner, Warner Bros. Entertainment, Inc., have no doubt hired Card because they figure he will make them money.

Given that Card himself has publicly and repeatedly challenged readers with his public anti-gay pronouncements, framing any interaction with his work as a political act, any response or lack of it may legitimately be seen as such.

Demanding Card be censored before he puts pen to paper may be problematic. Not buying a single thing he writes is not.