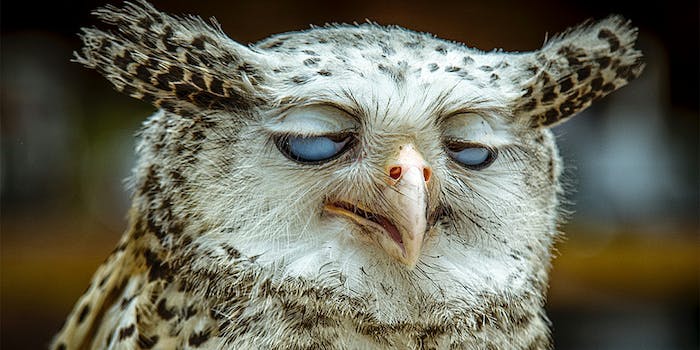 Today, you probably logged on to the internet dot com, and via your preferred social network of choice, encountered this meme.

This is the shit I log on for. pic.twitter.com/5OtwBNDGiu

That’s like three levels of some good shit. A conservative-leaning, ostensibly white, liberty-focused organization trying to use Black slang and a picture of an owl to take down the socialist movement that’s percolating online.

Then you have the aptly named Dr. Owl chiming in to pedantically owl-splain that that picture actually showed the owl orgasming. Not only is the concept of an owl orgasming extremely humorous (I laugh at that thought every time it pops into my head), if the owl really is doing so, then he enjoys socialism. That’s a self-own.

Plus, you have a guy named Dr. Owl. That’s a good name for a guy who knows his shit about owls. This is all well and good. Great stuff, to be frank. But to top it off, you have the person who aggregated it, calling it “the shit I log on for.”

Judging by the combined 100,000 likes and retweets, this is indeed the shit most of us log on for.

I would like for that to be the end.

I saw it this morning and moved on, and figured everyone else would. But instead, the owl has now become a source of content. Not only did BuzzFeed dox Dr. Owl (who, surprise, is not an owl doctor, even though no one took his very thin credentials at face value to begin with), it decided to track down ornithologists to see if an owl would really make that orgasm face.

Jamie Dunning, an ornithologist who has worked with owls, told BuzzFeed News there was no evidence to suggest that the owl in the meme was orgasming.

“Owls do not have an orgasm in the way we humans do. They likely do have some sort of reward mechanism for breeding, but birds has [sic] sex in a very different way,” he said. “It’s really isn’t very raunchy in birds.”

Man, fuck, who gives a shit? I didn’t think the owl was actually in the middle of completing a sex act, even when Dr. Owl said it was. If Dr. Human showed you a picture of a person and was like “Look, they’re jizzing,” would you contact a college professor or just… leave that weird dude alone?

Royal Society for the Protection of Birds told BuzzFeed that owls don’t have what human’s consider as facial expressions and they thought the image, “someone has put weird googly eyes in it,” they said.

That isn’t even a coherent sentence! But whatever! Let’s move on! Or not! Mic, another website, also writing about CUMBIRD, tracked down ANOTHER owl expert, who then debunked BuzzFeed’s claim that “someone has put weird googly eyes in it.”

As it turns out, the thing that makes it look like the owl is experiencing a brief moment of ecstasy is simply the result of its nictitating membranes — also known as a “third eyelid” — that all birds have in order to protect their eyes from damage.

“That owl is, in fact, merely blinking,” Zoology professor Tim Birkhead of the University of Sheffield told Mic over email. “And what you can see are its third eyelids (or nictitating membranes). All birds have these (Google it). It is because the owl has forward facing eyes that makes the image striking.”

I will not Google shit, Tim Birkhead. Especially not about a pic about a weird dumb bird possibly getting off.