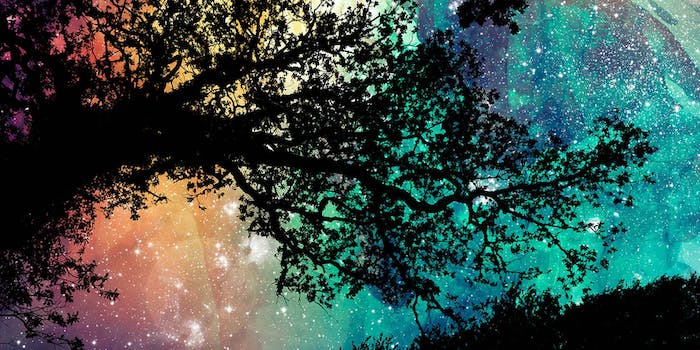 Calling your food ‘organic’ doesn’t mean what you think

That word is basically meaningless.

Whole Foods has just rolled out a brand new ratings system for its produce, based on lengthy questionnaires distributed to farmers. As announced on their website, the chain’s new “Responsibly Grown” label expands on the grocery giant’s existing labeling, which already does things like tell consumers where their produce was grown.

The announcement has quickly made waves across the Internet. Organic farmers are pissy about the change, but methinks they doth protest too much, because, let’s face it: The organic label doesn’t mean that much when it comes to food production, and anyone who doesn’t realize that is in for a rude awakening.

If the “organic” label conjures up images of a bucolic country farm with animals frolicking in pastures and happy farmworkers trundling around, think again. Here’s the thumbnail definition of the label from the United States Department of Agriculture: “Organic agriculture produces products using methods that preserve the environment and avoid most synthetic materials, such as pesticides and antibiotics.” (If you want, you can read the standards in detail, along with the processes for certification.) 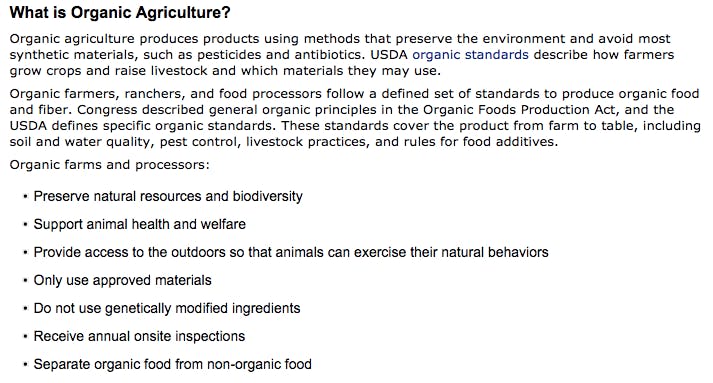 This whole Responsibly Grown label has an agenda, and it’s not just promoting responsible, ethical farming. Whole Foods is a business, and they’re leveraging their unique label to play to a specific customer demographic. They know they can charge more for produce making high grades, and they will. They also know that it’s good PR to be perceived as a company that’s concerned about farming and agriculture issues.

However, they’re not wrong when they say that the organic label needs some serious reevaluation and supplementation, because the label has been utterly defanged, and that’s something to think about the next time you’re in the grocery store.

Michael Pollan is not one of my favorite people, but in 2001, he wrote a really fantastic expose of the organic-industrial complex. It’s a long read, but it’s well worth it if you want to see how the label has evolved since the concept developed in the 1960s and 1970s.

To understand why the organic label as it stands now totally sucks, you do unfortunately need to be dragged along a brief tour of what sustainable farming looks like. In a nutshell, for a farm to function well in the long term, one of the most key elements is the condition of the soil—one reason some farmers consider themselves dirt farmers first and foremost. You can’t grow good crops without good soil, and every time you grow a crop, it takes nutrients out of the soil.

On industrial farms, the solution to this problem is typically to dump synthetic fertilizers into the soil and keep working it until it’s exhausted. Typically farmers use monocropping, in which the same crop is grown year after year. Pests and infections are common and hard to get rid of, so they apply synthetic pesticides, fungicides, and herbicides to their crops. These practices were some of the key reasons why people wanted to develop a better system: organic agriculture, returning to more traditional methods of farming.

Ostensibly, organic farmers rotate their crops, planting nitrogen fixers like fava beans (which trap nitrogen, an essential nutrient, in the soil so it can be used by other crops) periodically to keep the soil in good condition. They work in compost and manure rather than synthetic fertilizers. They let fields lie fallow so they can take a break. They manage pests with things like polycropping (planting multiple crops in the same field) and natural pest control (ladybugs are your friend).

All this sounds awesome! The problem, however, is that industrial organic doesn’t necessarily use these practices. In fact, at a glance, industrial organic farms look a lot like their conventional counterparts. Pesticides and herbicides of the nonsynthetic variety are still permitted, which is how compounds like copper sulfate are applied to fruit trees. You’re not required to take good care of the soil, though some soil management is expected. Monocropping is a-OK.

It’s “bare bones organic,” going through the motions but not actually taking the stewardship of the land seriously. The concept of sustainable and ethical farming is left out here, and the weakening of the organic standard through a series of statutory adjustments has made getting into the market very appealing to major brands and big farms. There’s a clear profit margin in producing organics, and relatively low investment risk thanks to the growing list of perfectly acceptable practices.

Industrial organic farms aren’t held to account for their water usage, for example, a significant problem in California—which grows a huge percentage of America’s produce—where a drought is strangling the water supply. They aren’t held accountable for topsoil loss and how excess nonsynthetic fertilizers and other farm products end up in waterways, creating imbalance in the local ecology. If they destroy habitat and push out indigenous species of plants and animals, that’s not a problem either.

Waste reduction practices aren’t a consideration (including supply chain issues like wasteful packaging), and neither is energy use. Thus, farms that make a point of using sustainable energy are viewed on par with those who do not. The distance traveled doesn’t matter either, which is why an industrial organic farm in Mexico can ship “organic” produce thousands of miles.

Perhaps most critically of all, the organic label is completely silent on the subject of farmworker welfare.

Many farmworkers are immigrants, and an unknown number are undocumented. They work in harsh, grueling conditions for minimum wage—or less. They are extremely vulnerable to wage theft, physical assault, and rape. For those who care about ethical food, the conditions experienced by the people who grow it should matter. We know things are bad for farmworkers, and we owe it to them to do better.

And we haven’t even gotten to animal welfare at this point. Yes, organic certification requires access to pasture, for example, but what does that really mean? Industrial organic often involves confined animal feeding operations and the same conditions that horrify people concerned about farm animals. That’s because “access” isn’t really defined, and thus, a farm can pass muster as long as there’s an open door somewhere.

Considerations about transport and slaughter also aren’t part of the equation. Organic farms are free to pack terrified animals into trucks for transport to slaughterhouses, and they aren’t required to use humane slaughtering practices. Organic meat may be free of hormones and antibiotics as directed under the law, which may be better for consumers, but the conditions should certainly give people room for pause.

What happened to the organic label is a long and complicated story to tell, but it started with a great deal of lobbying from industrial agriculture once companies realized that organic food was profitable. At the same time, the USDA was working to increase the number of certified farms, it, along with Congress, faced pressure from lobbyists to weaken the standard—and the best way to get more farms on the standard would be, of course, to relax it.

Organic farming today bears only the vaguest and most perfunctory resemblance to that envisioned by those who originated the standard. The dilution of the label is also manifestly unfair to farmers, as some, especially small farms, do take organic farming seriously, and they’ve adopted a “beyond organic” stance, focusing on producing sustainable, ethical, and local produce. Even as they invest in farming the right way, they’re competing with massive firms that meet the bare minimum, and they’re lumped in with industrial organic agriculture.

We need to either tighten up the organic mandate or admit that it’s useless and start all over again.

Photo via freestock.ca/Flickr (CC BY 2.0)