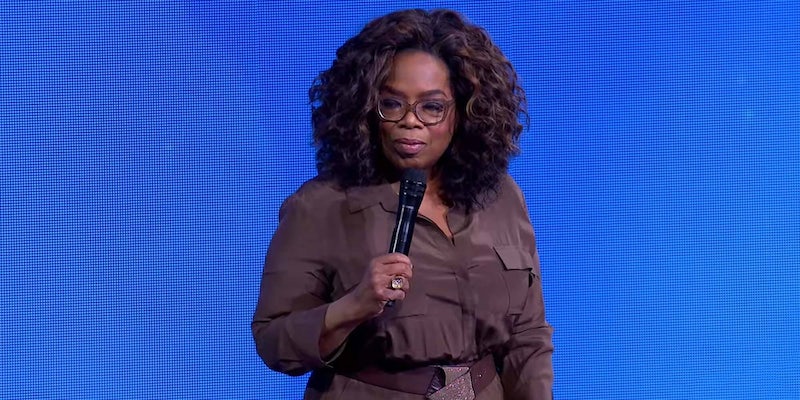 Oprah falls while speaking about balance in viral video

The media mogul, who is currently on a speaking tour, blamed the tumble on wearing the 'wrong shoes.'

Media mogul Oprah Winfrey fell on stage Saturday while speaking to a crowd in Los Angeles.

The incident took place while the 66-year-old was discussing “balance” at the Forum arena as part of “Oprah’s 2020 Vision: Your Life in Focus” tour.

Video of the tumble was captured by the Los Angeles Times and posted to Instagram shortly after.

“Wellness to me means all things in balance. And balance doesn’t mean all things are equal or at peace at all times,” Oprah says, moments before falling.

An audible gasp could be heard from the crowd as the billionaire lost her balance. Oprah went on to exclaim that she had worn the “wrong shoes” for the occasion before eventually being helped up by a stage assistant.

The irony of the situation was not lost on Oprah, who went on to continue much of her speech barefoot.

“Thank you so much,” she says. “It’s nice to be talking about balance and fall.”

Reaction to the fall online ranged from concern for Oprah to applaud, mostly from fans of deceased pop star Michael Jackson who are upset by her support of HBO’s Leaving Neverland documentary.

That's what happens when you don't apologize to the Jackson family and ignore the fact that you once kissed Harvey's ass!!!
Karma is real!!

Even 50 Cent joked on Instagram that Jackson’s ghost must have tripped her.

The tour, which began on Jan. 4 and is making stops in major cities across the U.S., will end on March 7 in Colorado. Celebrities including everyone, from former First Lady Michelle Obama to Dwayne “The Rock” Johnson, have made appearances so far.