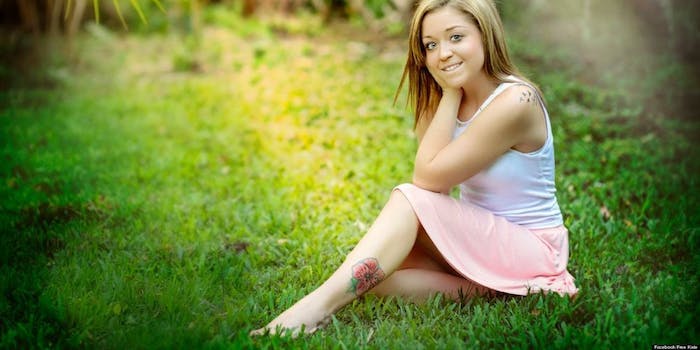 18-year-old Kate Hunt is being expelled from school and charged with sexual battery because the girl she was dating was underage.

The hacktivist group Anonymous has gotten into the act again, not of punishing corporations, but of rallying to the support of someone they — and many others beside — feel has been wronged. In this case, it is 18 year-old Kaitlyn Hunt, a basketball player voted the student with the most school spirit by her peers at Sebastian River High School in Indian River County, Fla.

Anonymous has announced #OpJustice4Kaitlyn to pressure the prosecutor to drop the charges against her of sexual battery.

Hunt was arrested by local police and then expelled from her high school after it was discovered she had a romantic relationship with another teenage girl.

Hunt, according to her father, who wrote about the situation in XO Jane, developed a relationship when she was 17 with a girl in her high school who was three years younger and a fellow player on her basketball team. When Hunt turned 18, the girl was technically still underage.

If in fact the officials at her school were alarmed at the law-breaking going on, they have done a reasonable job of hiding it. What they haven’t done as good a job of hiding was their Victorian embarrassment and bureaucratic fear of legal responsibility. Perhaps that’s an unfair accusation. But not as unfair, many believe, as the disproportionate actions taken against this teen.

In February, Hunt’s girlfriend’s parents discovered the relationship and, bypassing Hunt herself, Hunt’s parents and the school officials, went straight to the police.

“The police taped a conversation between Kate and her girlfriend,” wrote her father, Steven Hunt, Jr., “which led to Kate’s arrest. Kate was interrogated extensively without a lawyer present. I am a former police officer, so she trusted the police and didn’t feel she had anything to hide. Kate was eventually charged with two counts of felony lewd and lascivious battery on a child 12-16.”

The prosecutor, Assistant State Attorney Brian Workman, has offered Hunt a plea deal of felony child abuse, which would saddle her with two years of house arrest and one of probation. Additionally, because she is legally an adult, she might also wind up with a lifetime on the National Sex Offender Registry.

The judge in Hunt’s case said she could continue going to school. She was set to graduate in short order, after all. She was to have no contact with her girlfriend, the judge ruled, but could continue her education. However, this was insufficient for the girl’s parents, according to Hunt’s mother, writing on the Facebook account she set up for her daughter, Free Kate, which has more than 25,000 members as of this writing.

If any of this is making your blood boil, you probably already understand what has inspired Anonymous to try to help.

Her girlfriend “has said from day one, she cares about my daughter,” wrote Hunt’s mother, that “she never wanted her parents to do this, she was 100% consenting and it was by her own choice that she was with my daughter. She doesn’t want Kate to be punished at all, and feels like they did nothing wrong.”

If you wish to voice your opinion on this, you can use the hashtag #OpJustice4Kaitlyn, chime in on the Facebook group Free Kate and add your name to the 75,000 on the petition that has been launched on Change.org.