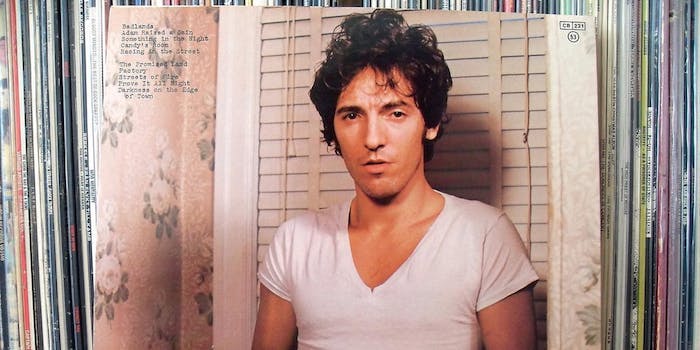 You'll be surprised what he had to say.

Chris Christie has High Hopes that he will win the 2016 election. But in the Glory Days—before he was Born [in the USA] to Run New Jersey, from Atlantic City all the way to the Darkness on the Edge of Town—Gov. Christie could be found Dancing in the Dark on the Backstreets of his Hometown to the music of working class, rock n’ roll Wrecking Ball, Bruce “the Boss” Springsteen.

It’s no secret that Christie is a longtime fan of Springsteen; he’s been to at least 129 concerts. But it’s also well-known that Christie’s love for the Boss has never been reciprocated, and from the looks of things, that isn’t about to happen anytime soon. “Despite heroic efforts by Christie,” Jeffrey Goldberg writes in the Atlantic, “Springsteen, who is still a New Jersey resident, will not talk to him.” Heartbreaking as it is, that doesn’t change the former governor’s enthusiasm for what’s important: The music.

Politico recently reported on newly discovered 1999-2000 posts to an online Springsteen listserv by Christie, where he asks about performances, posts setlists, and gushes over meeting the Boss. “He was everything I hoped he would be if I ever got a chance to meet him,” he wrote after detailing their meeting on a commercial airliner.

We dug a little deeper into Christie’s messages, however, and found some pretty wild stuff.

“We ran into each other again backstage at the Meadowlands. He had just come off of a grueling three hour set and was drenched with sweat. I joked with him and pulled my hand away and slicked my hair for a laugh. ‘Good one, Chrissie,’ he chuckled. Nobody had ever called me Chrissie before. I wasn’t sure if he was referring to my last name or my first. Anyway, he pulled me aside and told me—and this was right after Bush’s second election— ‘Hey, Chrissie. I gotta get something off my chest. When I campaigned for Kerry, I only did it for the paycheck.’ He felt so bad about that and insisted that I take the dufflebag full of hundreds he shoved into my arms. ‘You may need this someday,’ he told me.”

2) Springsteen breaks up a fight

“I had a meeting across the river (haha) this afternoon and you’ll never guess who I saw. If you guessed Bruce Springsteen, you are correct! Well, here I was just minding my own business when this teenager came up to me and started shoving me around, calling me names and making fun of my pants. When I get mad, my face turns very red, so then the teenager starts calling me a tomato. Being that I’m not one to fight against a teenager, I couldn’t respond when he started pelting me with street meat; he must have just bought it because I burned my cheek. Just when I thought I was about to get a briefcase full of tahini, out of nowhere, here comes the Boss wearing his dark sunburst Gibson acoustic guitar. He walked right up to us, winked at me, and said, ‘Hey Chrissie. This rascal giving you trouble?’ I nodded. Bruce proceeded to talk strumming a few chords. All of a sudden, he’s playing ‘Wild Billy’s Circus Story.’ The teenager calmed down and sat, hypnotized by the tale.”

3) Springsteen and Christie drive off into the sunset

“When this whole bridge business started, I didn’t know where to turn. Naturally, I put on my noise-canceling headphones and blasted Nebraska. I just needed to be whisked away for five minutes. So I’m sitting in my office rocking out to ‘Johnny 99’ when Bruce walks right in to my office. I didn’t ask how he got past the guards because they are huge Bruce fans, too. Wearing his signature bandana and aviators, Bruce was like ‘Sometimes life gets so hard, even us giants got to drive down that thunder road.’ Me? A giant? I could not believe Bruce considered me his equal. Bruce threw me the keys to a ‘69 Chevy and, I kid you not, said, ‘This is a town full of losers, Chrissie. And we’re pullin’ out of here to win.’ And we drove off, never to return. Except I had to be back for a meeting the next day. Still, it was a moment I will cherish forever.”

Photo via mtarvainen/Flickr (CC BY ND 2.0)