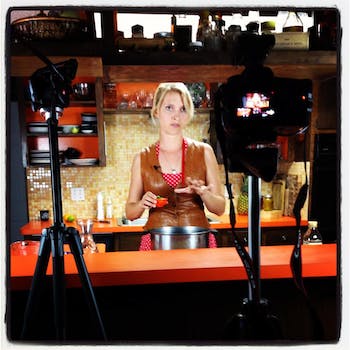 Beyond entertainment: The online food revolution

The Internet has become a one-stop shop for cooking tutorials, no matter your learning style.

With all of the drama and high stakes on the Food Network, cooking can be scary for beginners. But while television focuses on entertainment over instruction, the Internet has become a one-stop shop for cooking tutorials, no matter your learning style.

Culinary TV now features any kind of food- or holiday-specific Battles or Wars title you can think of. Master chefs grapple on Iron Chef. Celebrities have Rachael vs. Guy Celebrity Cook-off. Complete amateurs have Worst Cooks in America, while more experienced cooks have Chopped. And millions tune in each week to watch Gordon Ramsay shout his head off as chefs compete for the chance to cook in his restaurant.

“One of the best arguments I’ve heard for how to get people interested in cooking and food is to remind them that cooking and food are a pleasurable thing,” noted Mary Helen Leonard, a culinary instructor based in Austin, Texas. “It’s something we can all enjoy, and there doesn’t have to be all this pressure and drama and everything that television and media can make it into.”

Leonard worked in the front of the house in restaurants for most of her career, but it wasn’t until she lived in China with her husband that she realized how much she actually liked to cook. When she returned to the U.S., she did a culinary program and started working in the kitchen.

Now she teaches people to cook with ChefHangout.com, a one-stop site that allows you to take cooking classes with chefs via Google+ Hangouts. It’s basically a video conference call.

With Google+, both Leonard and her students can cook and interact at the same time, and if students have any questions or need an opinion, Leonard can easily observe and let them know how their meal is progressing. She mostly teaches dabblers—people who are curious but haven’t yet put a lot of work into cooking—but she occasionally she’ll get an enthusiast who wants to tackle a specific topic.

She’s always learning, no matter who shows up on the other end of the video camera.

“Sometimes I’ll be hanging out in a class with someone in a different country or a different state, and I learn from them while they’re learning from me,” Leonard explained. “That’s the coolest thing about teaching culinary anywhere, but I feel like online is a really great example of it. The universal truth is that you’re always learning.”

For Hilah Johnson, the self-taught chef behind Hilah Cooking, it’s about instant connectivity.

“One thing about YouTube is that it makes you accessible to the entire world—I mean, the Internet,” Johnson said. “There are people who I’ve been messaging with and responding to their comments since the very beginning, so I feel like I know these people and I feel like they know me.”

She started her YouTube channel in 2010, after the independent film she and her partner, Christopher Sharpe, had been working on lost its funding. Johnson cooked all the time and they already had a camera, so for them, it seemed like a fun experiment. She now has over 52,000 subscribers who tune into her twice-weekly show.

While Johnson originally made her videos for people in her age group who didn’t know how to cook, she is aware of the shift in food culture.

“It’s already gone that way where food is seen as entertainment for a lot of people,” she noted. “It’s hard to find shows about food that teach you any skills.”

“It’s sort of brainless,” explained Will Burdette, graduate student and host of NoSatiation, in regards to broadcast media. “It’s like junk food. Every once in awhile when you’re really hungry or you don’t feel like cooking, that’s what you want. But in the long term it’s better to engage with your media in a different way.”

Burdette, along with Leonard and Johnson, is part of the Austin Food Bloggers Alliance. Through networking, they keep each other motivated.