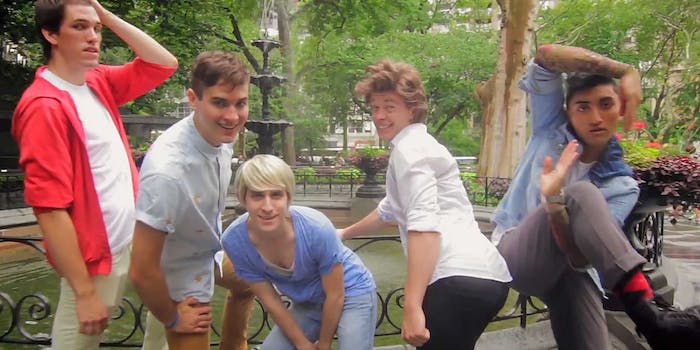 Is the One Direction musical parody brilliant, pure evil, or both?

One Direction’s long-anticipated tour documentary, This Is Us, arrives in just three days. If the teen in you can't wait that long, watch this.

One Direction’s long-anticipated tour documentary, This Is Us, arrives in theaters in just three days. But for the dizzy teenager in you who can’t wait that long, YouTube musicians AVByte are here to give you an aperitif, in the form of “This Is Us: The Musical.”

You may know AVByte from their previous excursions into the geekier side of Internet culture, including “Tumblr: The Musical” with Vlogbrother Hank Green, and a string of pop-culture musicals spoofing everything from Fifty Shades of Grey to gaming console wars.

But this time they’ve taken on what may be their biggest phenomenon yet. In “This Is Us: The Musical,” they spoof everything from Simon Cowell’s black shirts to Muslim band member Zayn Malik’s tokenism (“I’m just here for diversity!”). While the musical seems to have annoyed plenty of Directioners, many others are laughing along at the parody.

Styled as a cheesy montage, the musical parody mocks the lackluster musical skills of the 1D members (“We’re a band, though we’re not real musicians / Niall kinda can play guitar”), and portrays Harry Styles as a mega-star just waiting patiently for his contract to end so he can go solo.

Ironically, it’s Travis Slavin as Styles who stands out here, too, with his eerie resemblance to the real thing. Since the video landed on YouTube yesterday, it’s racked up almost 40,000 hits. But not everyone is happy. On Facebook, fan Simon Jagoe lashed out at the mean-spirited tone of the parody:

This must be a dream, Avshyte… think they’re justified in judging whether or not a band are “real musicians”. Christ it’s almost tragic that you don’t understand that people have different music tastes, and instead put down their popularity to the fact they are attractive.JUST BECAUSE YOU DON’T LIKE THEM DOES NOT MEAN THEY ARE BAD IT’S 100% SUBJECTIVE HOW DON’T YOU UNDERSTAND THAT YOU’RE LIKE THIRTY.

So is “This Is Us: The Musical” really an accurate portrayal of the band? Or is it a mean-spirited takedown of talentless hacks?