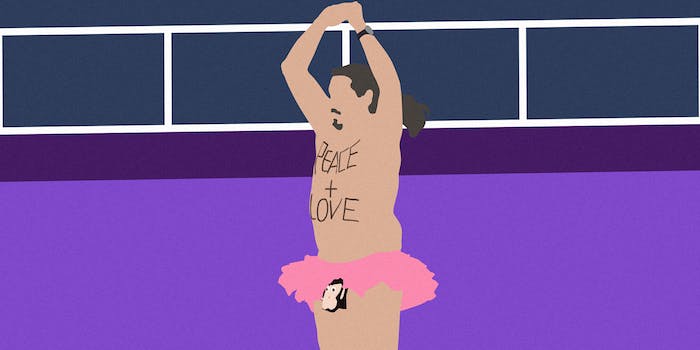 This is pure gold.

A ponytailed streaker made his way to the ice at the Winter Olympics on Friday, adeptly crashing what has otherwise been a largely dignified and peaceful international sporting event.

The brave man, clad in a tiny pink tutu and what can be described as nothing other than a “monkey penis pouch,” clambered into the rink following a men’s speed skating event, TMZ reported Friday.

This streaker just won the #Olympics.

The words “PEACE + LOVE” were written across his chest. Though his descent onto the ice and disrobing were admittedly graceful acts, the man did eventually slip and land flat on his (naked) back.

It’s unclear whether he left of his own accord or was escorted from the rink.

To be clear: This is no amateur we’re dealing with. The dude appears to have also streaked at the London Olympics in 2017.

You’d think we could have given him a gold medal by now.