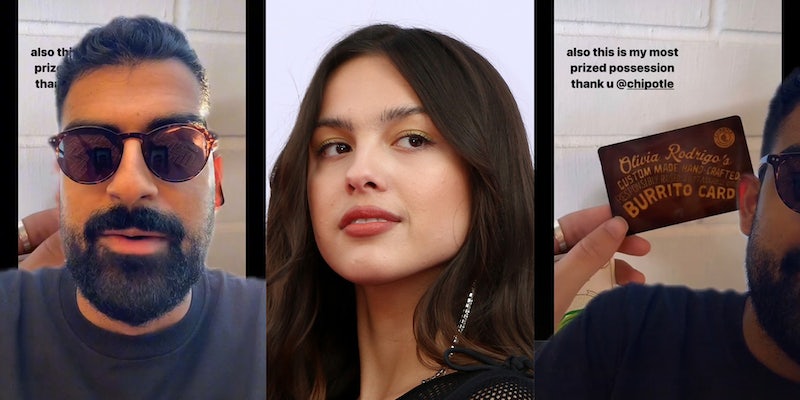 ‘Crazy how we give so much to people who already have more than enough’: Olivia Rodrigo posts her Chipotle card that gets her free food for a year, sparking debate

'Rich people get all the financial breaks.'

One of the strangest dichotomies of being a celebrity with a presumably high net worth is that popular brands will go out of their way to give them free stuff.

An example of this is currently going viral on TikTok. Olivia Rodrigo apparently posted a photo to her Instagram Story featuring a Chipotle card that entitles her to free food from the fast-casual chain for a year. She called it her “prized possession,” according to the screenshot featured on TikTok. Her name is featured on the card. The post appears to be old as users online posted about it back in 2021.

TikToker recently @tallneil made a TikTok video about Rodrigo’s card, however, revealing to many that “Olivia Rodrigo does not pay for Chipotle.”

“She has what’s called a Chipotle Celebrity Card. It’s personalized and it means that she can go into Chipotle whenever she wants and she does not pay. You can’t apply for it. You can’t buy it. It’s just a perk for being famous,” he says in a video that’s been viewed over 1.3 million times.

He then claims other celebrities have the same card.

“She’s not the only one. It seems like a lot of celebrities and influencers have this, but there is a catch. You get unlimited Chipotle not for life, but for one year. It expires after a year,” he says. “The reason why is because there’s a cautionary tale in marketing about the American Airlines Airpass that gave you unlimited flights for life. And American Airlines lost so much money from it they had to discontinue it and there was a huge lawsuit. So Chipotle learned from their mistakes and made their card expire after a year.”

Big Sean does have the same card, according to the Travel. Sports Business Daily reported that Chipotle sends the cards to celebrities who publicly and positively speak about the restaurant.

The idea is that celebrities will bring positive exposure to the companies in exchange for the free stuff. “Word of mouth is something that builds a lot stronger and it’s not as artificial. We think our food sells itself, and that’s one of the things that enables our word-of-mouth marketing,” Joe Stupp, the then-Chipotle social media manager, reportedly said in 2013 of the card.

The food chain isn’t the only one to offer up unlimited free food to celebrities. Chick-fil-A also reportedly has a similar card. And Colin Farrell, a huge fan of Irish Kebab franchise Abrekebabra, revealed in an interview with Jimmy Kimmel that he received the company’s first ever Black Card, which entitled him to grub from the chain without ever having to pay. In the 2020 interview, he said “I haven’t paid for a kebab in five years!”

McDonald’s also offers variations of its McGold Card that it awards to specific individuals, including celebs. Each card carries specific limitations, and the chain even conducted a sweepstakes to promote its McDonald’s mobile app that gave folks who installed and used it a chance to win this elusive free food card, which entitled the carrier to two free meals from participating chains and locations per week for life. Both Bill Gates and Rob Lowe have the McGold Card, according to the Travel.

TikTokers who viewed @tallneil’s post expressed their distaste that folks who could easily afford to feed themselves at fast food chains would receive such perks. (Celebrity Net Worth reported Olivia Rodrigo has about $5 million to her name.)

“Crazy how we give so much to people who already have more than enough,” the top comment on @tallneil’s video, with 88,000 likes, read.

“It’s amazing how the rich people get all the financial breaks,” another said.

The Daily Dot reached out to @tallneil via TikTok comment and to Olivia Rodrigo’s team via email.