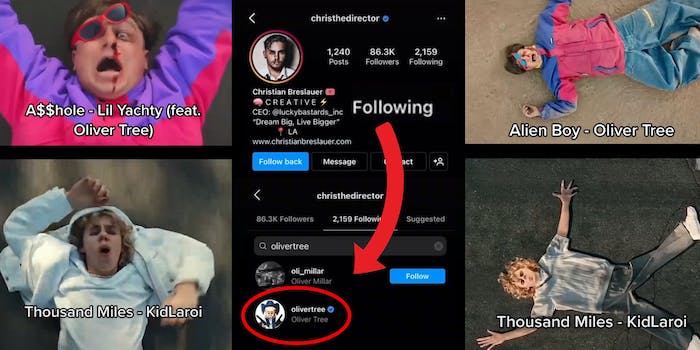 ‘I am so sick of big artists ripping me off’: Oliver Tree says Kid Laroi’s new music video ‘stole’ several shots from his

'It's not even subtle wow.'

Similar-looking shots appear in different movies, shows, and music videos all the time, often as a nod or homage to something else, but one artist is alleging that a new music video copied some of the visuals in his own videos.

In a new TikTok, Oliver Tree is saying that the Kid Laroi’s newest music video for “Thousand Miles” stole several visuals that he included in his music videos. He says that a shot of Kid Laroi being dragged by a car is similar to Tree being dragged by a Lil Yachty riding a moped in “Asshole” (in which Tree features). A dropped piano and the singer getting hit by an ambulance appear in “Miracle Man.” A version of Kid Laroi driving a train is compared to Tree driving a car in a big hat in “Hurt.” And a flattened version of Kid Laroi after being run over by a steam roller is compared to Tree laying on the ground after being hit by a car in “Alien.”

In all, Tree points to five similarities in four different music videos that he directed.

They steal that many shots and thought I wouldn’t notice? 🤣

​​”Kid Laroi’s new music video copies multiple shots from my videos,” he said to his more than 12.5 million TikTok followers. “As an underground indie artist who writes and directs their own music videos, I am so sick of big artists ripping me off.”

He also used a meme from The Office with two similar shots from one of his music videos and “Thousand Miles” to further illustrate his point.

Tree noted that he knows that it’s not necessarily Kid Laroi’s fault. He points to the music video director, Christian Breslauer, as the person to blame. Upon loading Breslauer’s Instagram page, Tree showed that he was one of the over 2,100 people that Breslauer follows on the platform, insinuating that Breslauer would’ve been able to see Tree’s work. (As of press time, Breslauer is still following Tree on Instagram.)

Tree’s video angered many of his fans, with TikToker Allie Brigante commenting “It’s not even subtle wow.”

“I can’t even tell when Oliver is being serious at this point but that’s literally copied lol,” another person commented, referencing the musician and internet personality’s propensity for trolling.

On Instagram, Breslauer has noted that the music video for “Thousand Miles,” which shows one version of Kid Laroi in red escalating a series of attacks on another version of himself in white, was inspired by the Spy vs. Spy comics.

Some of the images are very similar, such as the ambulance shots that end “Miracle Man” and “Thousand Miles” and each artist singing as they are dragged by a moving vehicle. But other instances, such as the images where each musician is laying down after a collision or the shots of each musician with his head out of a window (one is in a train, the other in a car), are more of a stretch.

People also pointed to Tree’s trolling nature and called it a marketing stunt to promote both Kid Laroi and Tree’s new music, as well as a video from March where Tree said that Lil Nas X sent him a cease and desist notice for stealing “Old Town Road” in his song “Cowboys Don’t Cry” despite sounding nothing alike. And a February Variety interview with Tree highlighted that Oliver Tree the online personality is very much a different person than Oliver Tree the musician (who says he doesn’t use social media).

SOS: help me out everyone, I don’t have the funds to fight this lawsuit since I’m bankrupt. Anyone can tell it’s totally a different song

Regardless of how much merit Tree’s allegations may have, if he’s joking, or if it’s all a big stunt, many of Tree’s fans are taking the claim at face value. If you take a look over at his most recent post in which he shares some of his favorite frames from the music video, many of the comments are now harassing Breslauer and calling him out for copying Tree’s work.