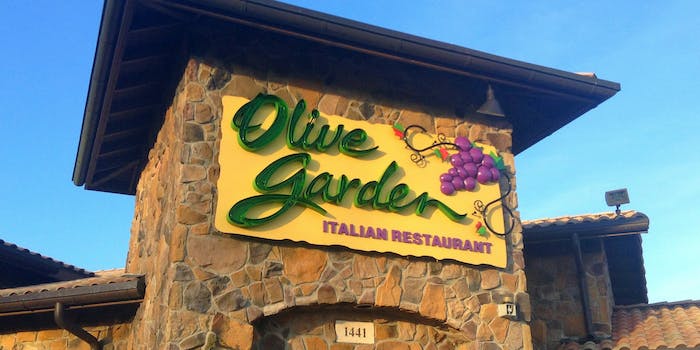 One amazing Olive Garden review can inspire a nation.

That was Olive Garden’s slogan for fourteen years. And even though they dropped it way back in 2012 (for the less catchy and more demanding “Go Olive Garden!”) It’s still the phrase most associated with the chain. That’s what Olive Garden is to most people, a cozy, familiar place you can take your family.

But something has changed. A spark has ignited a fire of Olive Garden fan fiction, which re-imagines the chain as otherworldly sci-fi experience.

That spark was an astoundingly epic review by writer Helen Rosner. It’s titled “Christ in the Garden of Endless Breadsticks”.

I visited nearly a dozen Olive Gardens from coast to coast and then I wrote this https://t.co/cDz2aswqB8 pic.twitter.com/YApt4ZLEBp

It seems Olive Garden is once again going through a rebranding, but rather than just review the new menu options, or the updated decor, Rosner chose to write about what Olive Garden means to her personally, its historical context, and what it means to us symbolically as a culture. Here’s how the article begins:

“In the fall of 1889, when he was 41 years old, the painter Paul Gauguin was brutally, furiously alone.”

She spends the next four paragraphs talking about Gauguin’s views on art and his tumultuous relationship with Vincent van Gogh, who apparently once assaulted him with a razor blade. It’s interesting stuff, but might leave the average Olive Garden diner scratching his head, and wondering if the Parmesan Zucchini Bites are good or not.

It’s an article filled with phrases like “exquisite mediocrity,” “psychospace of reality,” and at one point the dizzying sentence “These accretions of commercial activity, stripped from geographic or historical identity, are what the French anthropologist Marc Augé talks about as ‘non-places.'”

The review takes one of the most mundane of American dining experiences and elevates it to a quality piece of literary work.  It’s essentially the restaurant review equivalent of Andy Warhol painting a can of soup. 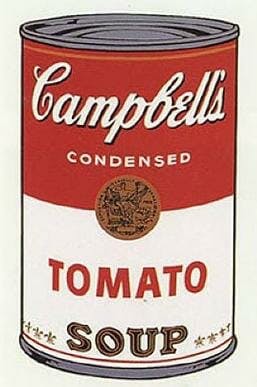 Rosner does get around to talking about the food at some point saying, for instance, that the ever present Alfredo sauce “could have patched a hole in your wall.”

That rather unflattering observation aside, the review is not entirely negative. Rosen basically argues that the chain should stick to what it does best, providing a buttload of pasta at a cheap price, in a comfortable familiar atmosphere.

There’s one particular section that not only sums up this feeling but has also inspired the internet’s collective imagination:

One of the things I love about the Olive Garden, the reason I continue to love it, despite its gummy pasta and its maladaptive, kale-forward response to modern food culture, is its nowhereness. I love that I can walk in the door of an Olive Garden in Michigan City, Indiana, and feel like I’m in the same room I enter when I step into an Olive Garden in Queens or Rhode Island or the middle of Los Angeles. There is only one Olive Garden, but it has a thousand doors.

That final sentence caught the attention of one commentor, who felt it would make a fine opening for a work of fiction.

"There is only one Olive Garden, but it has a thousand doors." One could hang a scifi/horror story off this line. (A+++)

Rosner agreed, and went so far as to issue a challenge.

Rules:
– Write real fiction, opening with that sentence used literally. (You're writing about a world with one 1000-doored OG.)
– Send it to me or, better, publish it online!
– I'll buy you and 3 friends dinner at OG. With wine!
– First 4 ppl to do this stunt get dinners!

And they just kept coming. Here are a few choice excerpts from what’s been penned thus far.

The shell of the Olive Garden beast keeps each chamber apart, keeps the denizens from mingling, but the back of the beast runs through them all.  It twists in those dark directions our three dimensional mind knows not.  Ana and Kata, Ceriden and Quariden. It spins and turns, passing through vast holes in what, to our small minds, seem solid walls painted in yellow tones and festooned with fake rock slabs.  — excerpt via Alexander Hollins

Deborah looked away, the way she always did when she didn’t want to engage, and walked back to her table. She ate a breadstick, and drank a glass of red wine that tasted tangy on her tongue as she picked at the chicken alfredo she ordered. But afterwards, once she had paid the bill, she couldn’t help herself and went to look one more time. And that time, she took another turn into a second dining room she had missed before, and when she opened the door she saw the unmistakeable, flat vastness of a midwestern strip mall. — excerpt via David Masad

We could interact with, but didn’t appear to be physically in the Olive Garden. It’s hard to explain. The staff and patrons paid us no mind as we ate their food, flipped their cups and put linguini on their heads. — excerpt via Curtis Silver

So far Rosner has received at least nine short stories via comments and who knows how many more as direct messages.

It’s worth noting that this isn’t the first time an Olive Garden review has received such attention. In 2012, then 85-year-old Marilyn Hagerty of Grand Forks, North Dakota, wrote a glowing review of the new Olive Garden that opened in her town, calling it “the largest and most beautiful restaurant now operating in Grand Forks.” The internet was enamored with her down-to-earth, unpretentious review of a restaurant that many Americans associate with their childhood. Even celebrity chef Anthony Bourdain was impressed.

Bourdain would in fact go on to write an intro for Hagerty’s book Grand Forks: A History of American Dining in 100 Reviews.

In a way, Hagerty and Rosner are saying the same thing. Despite its many flaws, Olive Garden is exactly what we need it to be, a place where people can gorge themselves on inexpensive pasta in an artificial Italian setting. The chain itself might never feel exactly like family, but it’s a place many Americans feel comfortable taking their actual families, and that might be all we need.