Why is Old Navy charging more for plus-size clothes?

It turns out that when you mark up online prices by $15 or more, your customers get pretty mad.

Last week saw the latest in a long line of unfortunate plus-size related PR moments for Old Navy. A shopper by the name of Renee Posey made a frustrating discovery on the Old Navy website: Plus size women’s jeans were selling for $15 or more per pair than misses sizes.

This, itself, was not the frustrating discovery. Plus size broads nationwide are well acquainted with the fact that our clothes often cost more, a discrepancy put down to the cost of the additional fabric required to swaddle our lardy asses. (Never mind that a size 2 usually costs no different from a size 14, even though there’s a difference in fabric volume there as well—such petty logic has no place here.)

No, the discovery Posey made was that the men’s extended sizes did NOT cost more, nor did the men’s clothes have their own special “men’s plus” section, as the women’s do.

So she launched a petition.

I was fine paying the extra money as a plus-sized woman, because, you know, more fabric equals higher cost of manufacture. However, selling jeans to larger-sized men at the same cost as they sell to smaller men not only negates the cost of manufacture argument, but indicates that Old Navy is participating in both sexism and sizeism, directed only at women…This is entirely unfair and offensive on many levels. For a company like Old Navy, who claims to be inclusive and strives to provide affordable clothing for everyone, this practice completely undermines their mission. Please join me in calling on Old Navy to take a stand as a leader in their industry, and tell them to stop their discriminatory pricing practices and offer products at a fair cost to ALL people of size, not just men.

The petition has over 40,000 supporters as of this writing, and by the time you read this it will likely have many more. Old Navy’s response to the criticism has been true to form, which is to say that it hasn’t been very good.

‘[Old Navy’s plus size items] are created by a team of designers who are experts in creating the most flattering and on-trend plus styles,’ says the rep in an e-mail to Consumerist, ‘which includes curve-enhancing and curve-flattering elements such as four-way stretch materials and contoured waistbands, which most men’s garments do not include. This higher price point reflects the selection of unique fabrics and design elements.’ 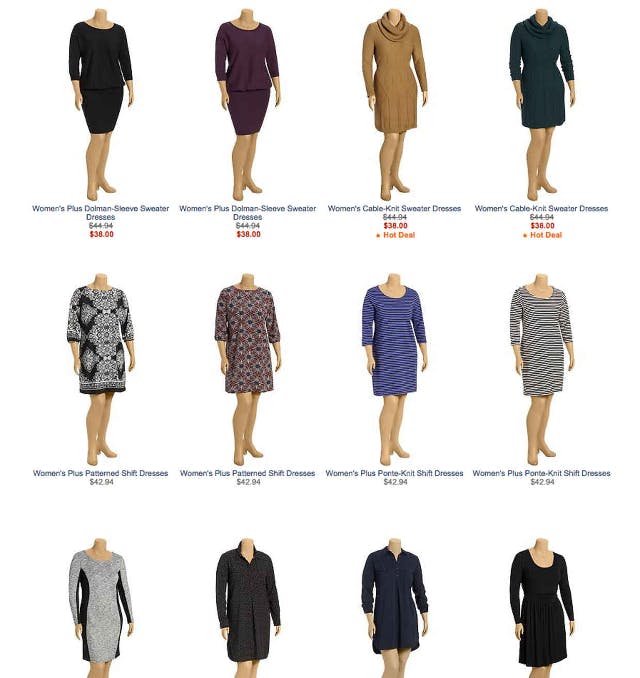 But Posey is calling bullshit on this explanation:

[Posey] claims that the ‘curve-enhancing’ and ‘curve-flattering’ design elements, like contoured waistbands and and four-way stretch materials, are also included in Old Navy’s regular women’s line…She also questions Old Navy’s investment in a special design team for its plus-size products, as there are fewer options for larger sizes. Posey claims, for example, that the regular women’s size range offers 161 choices of coats while the ‘Women’s Plus’ only offers 32 options.

Posey’s arguments are hard to ignore, especially given the lack of similar disparity for men’s extended sizes. On that, Old Navy’s position is that the extended-size men’s clothes are simply sized-up versions of the regular items, while the plus clothing involves “additional work.” Though if you’ve looked at Old Navy’s plus section lately, it’s tough to make the case that anything there required a team of experts working Plus Size Science in some magical Willy Wonka fat factory.

Sadly, this is not the first time Old Navy has alienated its plus size customers.

Ten years ago, in 2004, Old Navy first introduced its plus size line, and many fat women were thrilled (Many thanks to LiveJournal’s well-aged Fatshionista community—on which I was once a founding mod—for the Old Navy memories.). To be fair, at the time we were all pretty ecstatic over anyone new entering the plus size market, and so Old Navy’s announcement was met with an extraordinary wave of goodwill for the brand.

The clothes on offer were not earth-shatteringly new. They were pretty limited in the beginning, and Old Navy trades primarily in basics anyway—no, not those basics, but things like T-shirts and jeans and really cheap cardigans and flip-flops and T-shirts. And jeans. It was not cutting edge apparel, is my point. There is nothing intrinsically wrong with basics, and as an affordable option, Old Navy does them well. So we were happy! We went to Old Navy’s stores and bought their many reasonably-priced T-shirts and felt glad to have another resource in an extremely limited pool of options for brick-and-mortar shopping.

Sure, there were some baffling fit problems. The 3Xs and 4Xs were sometimes voluminous and evidently cut to fit women at least seven feet tall, except when they were unpredictably short-waisted. The jeans became infamous for thigh-rub-invoked blowouts, seemingly always at the worst possible moment, the failure socially maximized for utmost humiliation. Two items marked the same size could have radically different dimensions, like their jeans. And sometimes we might have wondered whether Old Navy had, in fact, seen a fat woman before. Maybe they were confusing us with giraffes? It’s an easy mistake.

But it was all mostly OK, because we could go to the store and try stuff on and, in the great tradition of fashion-minded fatties forced to hack and slash their way into style, make it work.

Come 2007, and all this changed. Old Navy eyed its scores of new chubby girlfriends and said, “You know, this has been fun, but we’d rather keep things more casual from now on,” and abruptly shuttled its plus-size offerings out of the stores and into an “exclusively” online space.

The argument I heard at the time was that Old Navy realized that the plus thing just wasn’t raking in the cash as they’d hoped, and the valuable floorspace being hogged by all those fat clothes could be turned to better profit by expanding what was an already large children’s department. Except Old Navy had done virtually nothing inside its stores to direct people to the plus department, or even acknowledge its existence, confounding many of the women trying to shop there, and leaving them to roam the warehouse-like space digging under the staggering heaps of $3 flip-flops and peering beneath tables upon tables of “Old Navy Athletic Dept” printed tees for the invisible Platform-9-and-three-quarters-like entrance to a secret plus size section, the stores trusting in some mystical fatass ESP ability to home in on the bigger items without being told where to look. An ability, I am sad to admit, that fat people don’t actually have. Thus, it didn’t appear as though Old Navy had given this endeavor a fair shot at success.

Petitions were wrought! Letter-writing campaigns happened! Keep the plus sizes in stores, cried the desperate double-digit-sized mob. But it was to no avail. Old Navy swept the plus section under the online rug, thereby relegating its fat-girl relationships to moped status.

Then came the inevitable anger. Old Navy thinks plus size dollars spend the same, but they don’t want us in their stores, with our fatness! A legend evolved in which Old Navy was a cartoon villain, steepling its fingers and and scowling at the notion of plus-sized women’s bodies cluttering up the aisles in its tidy and artfully arranged retail environments. We have no reason to believe this is actually true, to be fair. It’s far more likely that Old Navy put plus sizes in stores, didn’t advertise them at all, realized they maybe didn’t WANT to spend money to advertise them when they knew kids’ clothes were a proven source of profit, and finally stashed them online with a terrifically patronizing schitck about it being Extra-Exclusive and Special and stuff.

Still, the anger did not subside for a long time. Fat broads know how to hold a grudge. And then a returns issue stoked the flames.

Among Old Navy’s new Ultra-Exclusive Special Unicorn Fatass Shopping Benefit World was a promise that, to make up for the inconvenience of not being able to try on clothes before buying them, like every freaking other person, they would allow in-store returns on its mega-elite and select online-only shop of premier plus size apparel. Okay, at least we won’t get hosed on return shipping costs, the fat girls thought.

Except nobody bothered to alert the store employees to this fact. And so, as plus sized customers began to carry their ill-fitting web-only selections back to stores, they were met with dumbfounded stares from managers and cashiers alike. This I can personally attest to, as my first three in-store returns took roughly 17 hours each, while a team of no less than six employees established committees and bickered over how the return was to be done. Upon my fourth return, I was actually refused, and told that I had to ship back any Internet purchases, even though the shipping receipt actually said, in clear letters, “RETURN THIS ITEM TO AN OLD NAVY STORE!” I stopped shopping there at that point, and though I understand that they did eventually get the word out to stores that plus-size returns were a thing, although even that was eventually swapped for free online returns through the mail.

Old Navy’s handling of its plus-size problem was practically a textbook example of how not to do customer service. I know women who to this day refuse to shop at Old Navy as a matter of principle. I have made a handful of purchases there over the past several years—always for workout wear, because talk about having limited options—and in one recent purchase, two pairs of compression pants in the exact same size fit radically differently. So it’s nice to know some things never change.

Renee Posey’s petition is certainly drawing attention to Old Navy’s questionable practices, and this can only be a good thing, because with enough sustained criticism they may be forced to reconsider their approach. In the meantime, forward-thinking online retailers like ModCloth are vocally leading the charge against upcharging for plus versions of their items.

It’s easy enough to suggest “Just don’t shop there!” to women dismayed by Old Navy’s unbalanced pricing racket, but that’s not an option everyone has—even with jacked-up prices, Old Navy is still one of the most affordable resources in a limited plus size game. This is especially true for women who wear sizes on the larger end of plus; Old Navy is one of a handful of retailers that offers sizes up to a women’s 30, and whatever the offensive conventional wisdom about women on the bigger side of fat may be, I hope we can all agree that they should be able to buy and wear clothes without getting gouged on the cost.

As should all plus-sized women, since being fat comes with enough social drawbacks already without the added insult of having to pay more for clothing simply because companies believe they can get away with it.