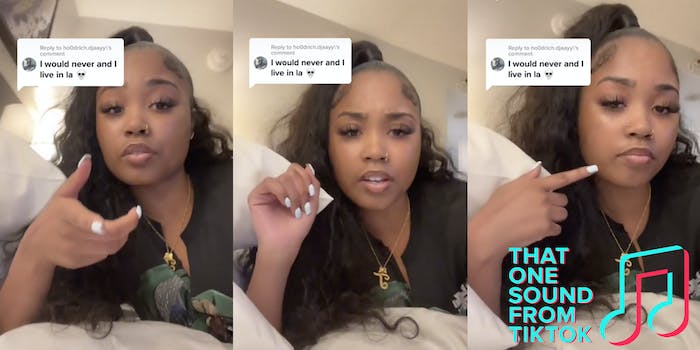 ‘Turn up’ is open to interpretation with this viral TikTok sound

The brands really want to turn up.

It’s been a horrific week, at the end of an absolutely grim May. This week’s sound is one that’s been circulating for nearly two months on TikTok but saw a surge at the beginning of this hellish month. And the brands all descended on it.

Bhad Bhabie, the MLB, and Duolingo all used the sound. “Turn up” was subject to interpretation.

One thing I’m gonna for sure, is stay in the house… Chile, I can’t even tell you what the weather is, I wouldn’t know!🥴🤷🏽‍♀️

peep the manifestation candle on the nightstand. i have a problem. 😍

On April 9, TikToker the_jaderoom, who has more than 48,000 followers, posted the sound. It was a response to a commenter stating “I would never and I live in la” to a previous TikTok she posted about taking a trip to L.A. to see rapper Lil Durk.

In the comments, several people claim the sound isn’t hers; the top comment says, “Your voice definitely doesn’t match you face but i love it bae.” She confirmed to the Daily Dot that it’s her sound. Multiple comments also suggested it had “potential” as a sound.

It got popular again in early May, and the_jaderoom responded to someone asking her to pin the sound by directing people to her hair videos instead. “It was literally a response to somebody,” she says in the video.

In the comments, what appears to be the official Little Caesar’s account asks if it can use the sound. The_jaderoom responds, “ahaha no.” The official Sour Patch Kids account and Trident gum account both did got an OK, but neither appears to have tagged or credited her.