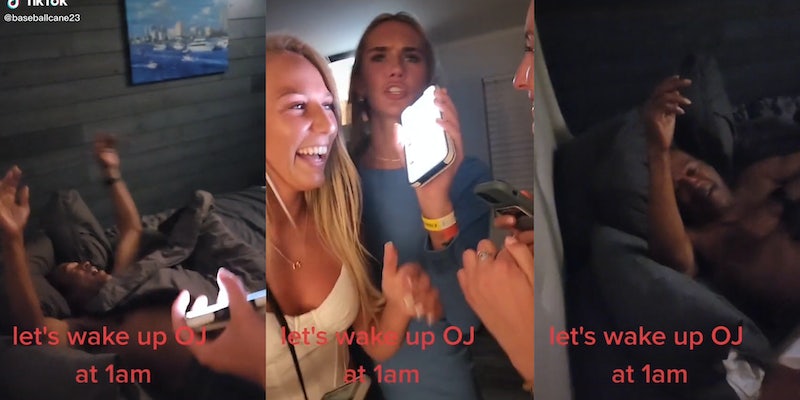 A viral TikTok posted this week sparked debate after showing a group of young, white women loudly waking up the infamous O.J. Simpson in bed, asking him to “party.”

The TikTok, which has over 439,500 views, was posted this week by Andrew Silverman (@baseballcane23). On Silverman’s TikTok and LinkedIn profiles, he says he is a former baseball player from the University of Miami and the owner of sports memorabilia company Icon Auction & Events, based in Fort Lauderdale, Florida.

The video, filmed by an unknown man (presumably Silverman), shows a bunch of young women going into a room where Simpson is sleeping, yelling and making noise to try to get him to wake up.

“Let’s wake up OJ at 1am,” Silverman captioned the video.

Simpson is a former football player known for his acquittal of the murders of his ex-wife Nicole Brown Simpson and her friend Ron Goldman in 1994. Since the acquittal, Simpson has made several public stunts which drew attention, including writing a book called If I Did It where he outlines how he “would have” committed the murders.

The viral TikTok sparked controversy in its comments section. Some users were shocked the women partied with Simpson despite his notoriety.

“They were born in the 2000s and haven’t been told,” another responded.

Others found the video funny, and made jokes at the women’s expense.

“Gonna have a killer time,” one user joked.

“Oj still out here slaying the white girls,” another commented.

It seems the TikToker who posted the video might be friends with Simpson. Another video posted in February on the user’s account shows the pair joking around at what appears to be a sports bar.

Another video, posted in January, shows a picture of Silverman and Simpson at another bar.

“Ft Lauderdale. you never know who you run into,” Silverman captioned the video.

Silverman did not respond to the Daily Dot’s request for comment via LinkedIn message or email. Simpson does not have a media contact listed on his IMDb Pro page.