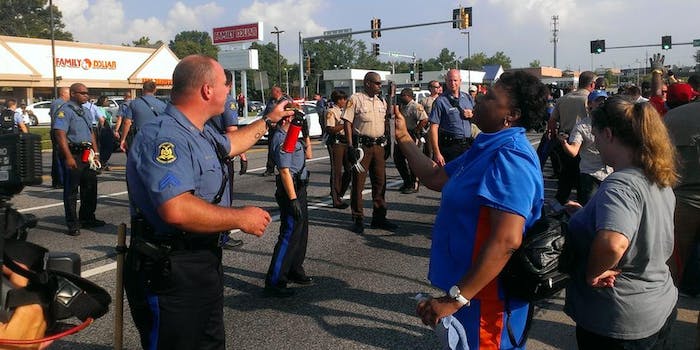 Supporters have opened a charity called Shield of Hope.

After raising $234,910 on GoFundMe, the original fundraiser for Officer Darren Wilson has now closed—although not as a result of the many complaints it received from members of the public.

Wilson became a public figure after shooting unarmed teenager Michael Brown, which precipitated into two weeks of explosive protests in Ferguson, Mo. Elsewhere, people showed their support for the protesters by donating to online fundraisers for a Michael Brown Memorial Fund and a local Ferguson food bank.

But neither of those fundraisers were as successful as the campaigns raising money for Wilson, which include two GoFundMe pages, a private donation drive from the Fraternal Order of Police, and a fundraiser run by the KKK.

Many people complained that the “Support Officer Wilson” page violated GoFundMe’s acceptable use policy, which forbids people from profiting from “items that promote hate, violence, racial intolerance, or the financial exploitation of a crime.” This is because many of the earlier donations were accompanied by racist comments such as “Thanks for taking out the trash.” One person even donated under the username “Jim Crow.”

@gofundme but you’re still allowing the racist campaign to run. Does that 5%profit you get mean you turn a blind eye to racism? #MikeBrown

GoFundMe’s response was to delete any hateful or racist comments, but to allow the fundraiser to remain active. GoFundMe typically takes a 5 percent cut of all money going through the site, leading to claims that the company was motivated by profit. As a result, civil rights activist Shaun King launched a boycott of the site.

. @GoFundMe boycott will begin @ 3pm. Unless the Wilson campaign is ended we ask that you never use the site again for new campaigns.

The first “Support Officer Wilson” page closed for donations this weekend, but only to transfer attention to a second fundraiser, which has already reached over $148,000 in donations. The difference is that donations to the new campaign will now go through a tax-deductible charity called Shield of Hope.

Most of the donations on the new GoFundMe page appear to be anonymous, possibly due to the amount of media coverage garnered by the first campaign.

As reported by The Wire, the board of directors for the Shield of Hope charity includes Ferguson Police Department Public Relations officer Timothy Zoll, local councillor Joe Eagan, and Missouri State Rep. Jeffrey Roorda. There is also private donation drive on the Fraternal Order of Police website, where officers can send money to Wilson without having to use GoFundMe as an intermediary. Shield of Hope shares an address with the local Fraternal Order of Police lodge.

Any donations to these fundraising drives are supposedly going toward Wilson’s legal fees and living costs. But as many people have already pointed out, Wilson is currently on paid administrative leave and has yet to be charged with any crime.