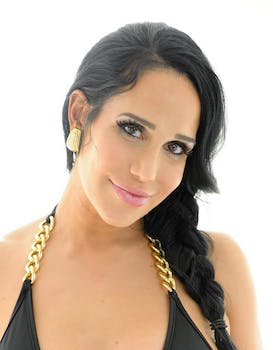 She's tried stripping and just about everything else. Now, Suleman is turning to GoFundMe for a crowdfunding campaign.

The infamous Suleman, a mother of 14 who nose-dived into the national spotlight when she gave birth to octuplets in 2009, recently launched a Facebook-verified, crowdfunding campaign on GoFundMe, a two-year-old crowdfunding site that pays no attention to campaign durations and allows project creators to withdraw funds raised at any point in the campaign. Suleman hopes to raise the  $150,000 she says she’ll need to move her family into a new house.

Titled “Octomom Home,” the campaign’s description is bare-bones thin—even the $150,000 figure has been left off the site—but Suleman does take the time to explain that she is “having to move out” of her home soon and is now “very close to being able to buy a home for my kids.”

For now, however, Suleman, 37, needs money pronto, even after her Wicked Pictures-produced Octomom: Home Alone sex tape and recent appearances stripping at the Playhouse in Miami (though those two 12-minute sets did earn her $5,000). Donations have trickled in sem-iregularly: in the past 19 hours, she’s already accrued $250 from 10 donors.

“For the sake of her children, they need a home regardless of how you judge her,” wrote backer Felicia Payton, who chipped in $5. “Most women do not and will not take on the responsibility but she has. Most women would give only one child to the system but she has not. I have children and it has been a long road, but I will do what I can for the sake of my children.” 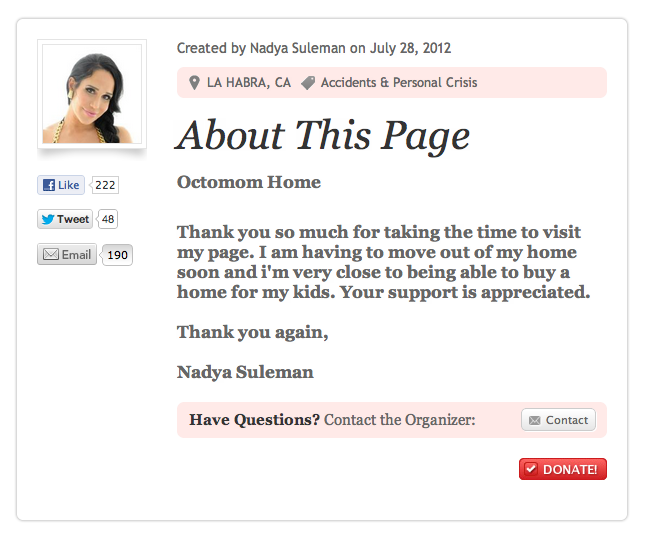 It’s safe to say that Suleman would agree with that sentiment. In her campaign’s lead video, she explains her devotion to her kids and says that she would do anything to for them.

“I have fourteen children,” she says in the linked video, posted to YouTube in late January. “The oldest is ten, and then it goes down to two-and-a-half. I do everything by myself. I’m a great caretaker of fourteen kids. I’m a type A personality—workaholic. And there’s nothing I won’t do in regards to providing for my kids.”

Two weeks ago, Suleman was quoted by E! Online as saying she was in “a stable situation” financially.

“Nadya has been off welfare for a month now,” her representative added. “Nadya’s financial situation has changed dramatically in the past few months, and between her endorsements, movie, and appearances, she is financially stable for the first time.”

No telling exactly where that money went. Suleman did not respond to the Daily Dot’s request for comment. Perhaps she will if we decide to donate.