An Occupy Wall Street member hijacked the Twitter account of Adbusters, after the magazine criticized a fundraising promotion.

Adbusters, a Vancouver-based magazine that is widely credited with helping to get Occupy Wall Street movement started, had its Twitter account hijacked this week by a former editor and current member of an Occupy Wall Street nonprofit. It’s an embarrassing public spat for a movement that’s struggled to regain momentum after captivating the world’s attention for months in 2011.

The incident happened after Adbusters leveled a series of furious tweets at the Occupy Solidarity Network—a nonprofit founded by early OWS members that houses donations to the movement—after the group began selling an iconic poster that’s come to symbolize the anti-capitalism movement.

On Tuesday the group, the Occupy Solidarity Network, blasted an email marketing campaign titled “Give the Gift of Occupy” that hawked the iconic poster for sale as a fundraiser.

As the email put it:

“This year, we are commemorating the Occupy generation by offering, for a limited-time only, posters and canvas prints of the iconic ballerina and bull poster that sparked our global movement. The proceeds of your donation will go into an activist fund managed by the Occupy Solidarity Network, the mutual aid non-profit established by Occupy movement founders Priscilla Grim, Justine Tunney, and former Adbusters editor Micah White. Your contribution will spark and sustain tomorrow’s social uprising of the 99%.” 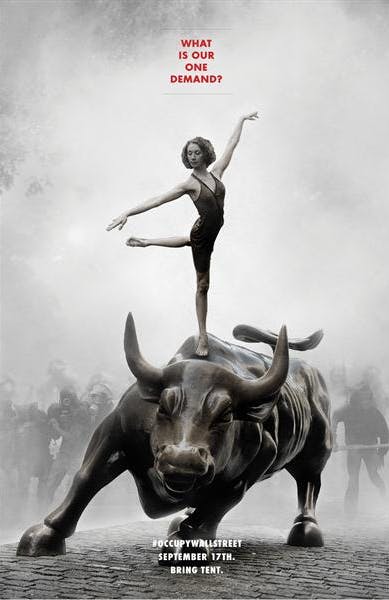 Adbusters responded by sending a message to the group’s leaders asking, “Are you all seriously doing this?”

Adbusters took issue with the poster sale “undermining the entire message of the movement,” and urged Occupy Solidarity Network to abandon the campaign.

“Think about all the people who put their asses on the line, risked jail and police brutality, gave their time, energy and reputations … and you’re selling the poster? You’re turning the movement into a parody of itself and proving all of the critics right,” Adbusters wrote in its response email.

By Wednesday morning, the Occupy group was, however, still selling the poster and had not responded to Adbusters.

That’s when things got really wacky.

The two previous tweets criticizing the poster sale were deleted. The hijacked Adbusters account tweeted this:

This account is now under the control of former Adbusters editor Micah White at @LeaderlesRevolt in a protest against @Adbusters. – MW

White went on to tweet that he left Adbusters because the organization had “lost its spirit.”

I believe that #Occupy was a “social movement IPO” – early adopters who stayed true to the path should be given stipends.

The hijacking lasted several hours, until Adbusters regained control. In a tweet the next day, White called the incident a “playful insurrection” and said it was the “beginning of a sustained campaign to protect legacy (and) heritage of #occupywallstreet.”

Adbusters maintains its disagreement with the poster sale calling it the “merchandizing” of the movement. It’s encouraging Occupy supporters to send messages to the Occupy Solidarity Network and its leaders to stop the campaign.

One of those leaders, Priscilla Grim, took exception to Adbusters characterization of the poster sale, saying it is far from undermining the movement. It’s enabling it, she said.

She tells the Daily Dot that Occupy Solidarity Network is a non-profit 501c4 created in December 2011 to house donations to Occupy after concerns arose about other Occupy donation clearing houses skimming service fees from donated money.

She said the fund never had much cash, but every dime has gone to helping activist volunteers with incidental expenses. Since 2011, about 20 to 30 people have been helped with things like utility bills, food, boots, or travel expenses to get home for a funeral or family emergency. One man hosting three other protesters in his home for an anti-Walmart demonstration was given $1,500 to pay one month of rent and utilities. That’s the largest payment Grim can remember.

“Our biggest expense right now is our Mailchimp account,” she said.

Nobody is paid a salary out of the account, Grim said, and that’s not the intent of the fund. She and other activists related to Occupy Solidarity Network hold down full-time jobs and volunteer their time on nights and weekends. While White’s IPO tweet seemed to indicate he might be in favor of paying activists, Grim said that has never been the goal.

“We really feel as a board it sets a dangerous precedent to set up activists with salaries,” she said. “We want to solve the crisis at hand, which is a world taken over by capitalism, and support the things that make that work possible.”

She said the poster sale is an attempt to keep money in the fund to continue to help activists with those incidental expenses. Asking people to buy a poster for $17 to replenish the fund one sale at a time, she said, is ideologically more in line with the movement than asking people with big wallets for big, behind the scenes donations like other nonprofits.

“We don’t want to beg people for money,” she said. “It would be more of a breach of the values of Occupy to go into a room full of 1 percenters and say, ‘Hey, can we have our anti-capitalist movement funded by you?’”

Grim did not comment on the Adbusters twitter hijacking, saying it would be up to White to discuss the incident. As of publication time, he responded to email requests for comment only by sending a link to his own chronology of the tweets on Storify.