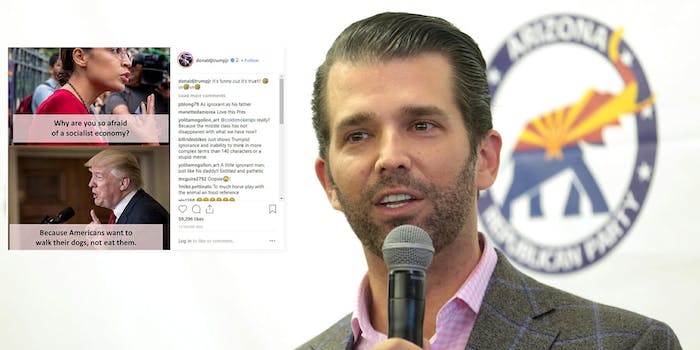 Trump Jr. is just the latest Republican to go after Ocasio-Cortez.

Donald Trump Jr., the eldest son of President Donald Trump, used a meme of representative-elect Alexandria Ocasio-Cortez to imply that socialism would lead to Americans eating their dogs.

Trump Jr. posted the meme late Thursday on Instagram. It shows two pictures, one of Ocasio-Cortez with text that says “why are you so afraid of a socialist economy?” and another of the president with the caption: “because Americans want to walk their dogs, not eat them.”

Ocasio-Cortez has been the subject of numerous attacks from Republicans since her upset-win in a New York Democratic primary earlier this year and subsequent election to the House of Representatives in the 2018 midterm elections.

In response, the representative-elect asked whether people “have jobs to do?” other than attack her online. The meme from Trump Jr. was swiftly mocked by people on Instagram.

“As ignorant as his father,” one person wrote under his post.

“Just shows Trumpist ignorance and inability to think in more complex terms than 140 characters or a stupid meme,” another person wrote.

Meanwhile, the representative-elect and other progressive candidates have criticized their freshmen orientation ahead of becoming members of Congress.

As Business Insider notes, Ocasio-Cortez and Ayanna Pressley, who won a House seat in Massachusetts, were critical of an orientation held at the Harvard Kennedy School.

“Our ‘bipartisan’ Congressional orientation is cohosted by a corporate lobbyist group. Other members have quietly expressed to me their concern that this wasn’t told to us in advance,” Ocasio-Cortez tweeted on Thursday. “Lobbyists are here. Goldman Sachs is here. Where‘s labor? Activists? Frontline community leaders?”

Our “bipartisan” Congressional orientation is cohosted by a corporate lobbyist group. Other members have quietly expressed to me their concern that this wasn’t told to us in advance.