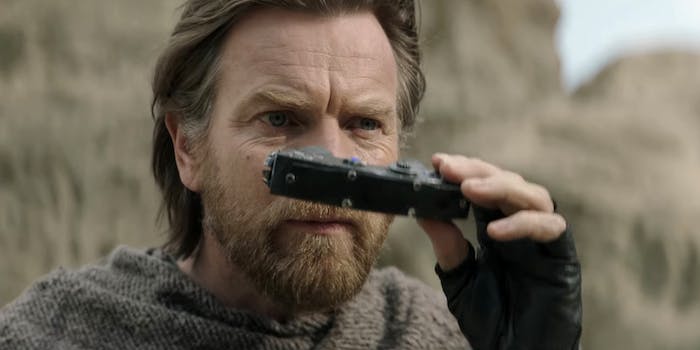 He's seeing a lot through those macrobinoculars.

The first trailer for Obi-Wan Kenobi, the Disney+ limited series that has Ewan McGregor reprising his role from the Star Wars prequel trilogy, debuted on Wednesday to great acclaim from fans. But amid analyzing all of the newer aspects, the fervent love for Obi-Wan and “Duel of the Fates,” and young Luke Skywalker emerged an entirely new meme format.

About 20 seconds into the trailer, we see Obi-Wan, perched near the front of his cave and using his macrobinoculars to view the nearby Lars homestead. Obi-Wan watches as Owen (Joel Edgerton) and Beru (Bonnie Piesse) step out of their home before zooming in on a young Luke, who’s perched on top of the dome wearing goggles and pretending to pilot a ship. Obi-Wan pulls the macrobinoculars away with an unreadable expression on his face.

The image and echo the scene is trying to evoke is pretty obvious: From a long distance, Luke is the spitting image of his father Anakin, and he’s around the same age as his father was when Obi-Wan first met Anakin in The Phantom Menace. Like most of what we’ve seen of Obi-Wan Kenobi so far, it’s an image meant to tug at our nostalgic heartstrings. But soon after the trailer’s debut, people started to screengrab the clip of Obi-Wan lowering the macrobinoculars from his face—one with them at eye level and another with his face visible—to suggest the latter shot is in reaction to whatever he’s viewing.

Because Obi-Wan’s expression is on the more complex side, there are so many different ways to interpret how he’s feeling. Is he wistful? Concerned? Does he feel a kind of affection? Depending on how his relationship with Luke plays out in the miniseries, it could go a number of ways, so as a reaction shot, it’s ubiquitous.

And thus, a new meme format was born.

For instance, many of the iterations ran with the Star Wars theme and showed Obi-Wan reacting to things in and out of the galaxy far, far away that he would otherwise have never encountered. Sure, he’s never encountered an older Boba Fett, Grogu, the Mandalorian, or his eventual namesake Ben Solo, but it’s sure fun to imagine it.

And what might be even creepier than Obi-Wan keeping tabs on the Lars homestead from a distance for the first 19 years of Luke’s life? Seeing someone watching him right back.

We’ll be able to see McGregor’s Obi-Wan reacting to a lot more things when Obi-Wan Kenobi debuts on Disney+ on May 25.