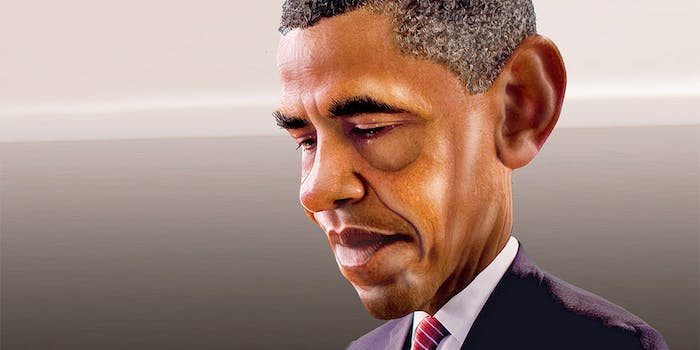 He's on the right side of history.

Last week, presidential historian Douglas Brinkley boldly claimed that Barack Obama’s executive order on immigration would cause him to be remembered as “a folk hero to Latino Americans.” While I can’t speak for the collective cultural memory of another ethnic group, Brinkley is right about one thing—President Obama has put himself on the right side of history. While Americans are more divided on the controversial move, a wide majority of Latinos (90 percent) and young voters (73 percent) supported the executive order, according to poll data released Monday.

Advocates calling for immigration reform on Twitter were equally supportive:

A pretty good day for the DREAMers who forced the issue by heckling Obama at speeches. And they got paid way less than lobbyists.

It’s important to remember that, when Obama became the first sitting president to publicly support marriage equality, Newsweek ran an iconic cover deeming him “The First Gay President.” Even though his stance was controversial when he took it in 2012, today 35 states and a clear majority of Americans recognize the freedom to marry, not only vindicating Obama’s immediate political instincts but cementing his place as a champion of the right cause in one of the most significant civil rights struggles of his time.

While there are major differences between the issues of LGBTQ equality and the plight of America’s roughly 11.4 million illegal immigrants, it’s necessary to identify the three main reasons why Obama will also be remembered hero on this humanitarian issue.

As Obama explained in his November 20th speech on immigration, his offer to illegal immigrants is as follows:

If you’ve with been in America more than five years, if you have children who are American citizens or illegal residents, if you register, pass a criminal background check and you’re willing to pay your fair share of taxes, you’ll be able to apply to stay in this country temporarily without fear of deportation.

Although this plan excludes both recent illegal immigrants and any who might arrive in the future, nearly 5 million people are expected to benefit from this plan. As the White House fact sheet further clarifies, “those undocumented immigrants who have lived in the US for more than five years and are parents of U.S. citizens or Lawful permanent residents” will be able to stave off deportation for three years at a time “if they come forward and register, submit biometric data, pass background checks, pay fees, and show that their child was born before the date of this announcement.”

While relieving the threat of deportation facing DREAMers, the young undocumented immigrants who lacked the adult agency to be responsible for their illegal status, it also diverts resources and attention to truly dangerous aliens, like convicted felons. And the plan will make it easier for the more than 1 million highly-skilled immigrants needed for sectors of the economy like the biomedical industry and tech sector to obtain permanent resident visas.

While alleviating the daily existential anxiety previously facing its beneficiaries, the executive order will also help the economy. In its report on the impact of his 2013 immigration reform bill, the Congressional Budget Office found that it would stimulate the economy by expanding the labor force, reducing unemployment, and increasing average wages and worker productivity. Additionally, undocumented workers will have more legal protections for their rights as workers and, consequently, see an increase in their overall standard of living.

While some experts are less optimistic about the executive order (it is, after all, more limited in scope because it isn’t a legislative measure), the consensus is that it will still have a positive effect.

Saturday Night Live may have picked up headlines with its “Schoolhouse Rock” parody attacking Obama for bypassing Congress, but it also forgot recent American history (including events through which it lived). Ronald Reagan and George H. W. Bush were both able to shield undocumented immigrants from deportation through unilateral executive action without controversy and Obama was not, because they lived in the era before Republicans killed bipartisanship.

While it’s easy to rest on the cliche assumption that both parties are equally responsible for the gridlock and partisan bickering currently infecting Washington, the hard data clearly demonstrate that Republicans have been abnormally unyielding in their refusal to work with President Obama. Michael Tomasky of The Daily Beast demonstrated as such. Tomasky compared Democratic support for four of President Bush’s more controversial bills (the tax cut, the Iraq War bill, No Child Left Behind, and Medicare reform) with Republican willingness to work with President Obama on four of his own signature measures (health care reform, Dodd-Frank, the stimulus, and “Don’t Ask, Don’t Tell” repeal). He found that a GOP legislator today “opposes the major proposals of the president from the other party seven times more intensely” than his or her Democratic counterpart did during the Bush administration.

Senator Mitch McConnell actually admitted to the National Journal in 2010 that the priority for Republicans was “for President Obama to be a one-term president.” After Obama’s reelection in 2012 dashed that goal, Republicans still refused to work with the president to an unprecedented degree, resulting in the 113th Congress (the one currently in session) being the most unproductive legislature in modern American history.

This is more than a partisan gripe; from deliberately forcing a debt default and shutting down the government to stymying necessary and popular measures on issues from gun control to, yes, immigration reform, this Republican obstructionism poses a grave threat to our government’s ability to fulfill its most basic responsibilities.

Fortunately, as Marc A. Thiessen of The Washington Post recently wrote, Obama’s actions on immigration are calculated to “to elicit a self-destructive response from the GOP,” be it racist comments that will alienate Hispanic voters or shining a light on the extent of their culpability for the gridlock in Washington.

Thiessen, however, mentioned all this as a way of criticizing Obama. This not only ignores that immigration reform would have been impossible any other way with a Congress that refuses to work with the president, but also that the president’s plan to whip up Republican histrionics only works precisely because they have become so predictably hyperpartisan. But his overall point is very insightful. Much has already been written about the fundamentally racist reasons for this Republican obstructionism, and regardless of its origins, it needs to be exposed and arrested.

Even though President Obama’s immigration reform bill couldn’t get past the Senate, the online movement that mobilized to push it through might ultimately leave an impact on this country despite that loss. In an interview with Politico, LATISM.org founder Elianne Ramos talked about how Hispanic activists learned how to “move the needle [of public opinion] through social media and that is the measure of success” (her hashtag #LATISM was used more than 1 million times a week as of spring 2013).

In a similar vein, although Republicans celebrated their gains in the midterm elections of 2010 and 2014, the reality is that those results were primarily caused by low turnout rather than a sudden outburst of GOP love. When it comes to presidential elections, which traditionally inspire higher turnout, the demographic math is inescapable: If Republicans want to win, they’ll need to do much, much better among Hispanic voters (the goal for Democrats, of course, is to keep them turning out for their party instead of staying home or becoming a swing block).

It’s easy to forget that, in the six presidential elections between 1992 and 2012, Republicans only won the popular vote in one—the 2004 contest between George W. Bush and John Kerry. Not coincidentally, Bush also made a better showing among Hispanics than any Republican before or after him, netting more than 40 percent of their vote. That’s why this observation from Eileen Patten and Jeffrey S. Passel of Pew Research is so important:

While President Obama’s executive action expanding deportation relief to almost half (48 percent) of the total unauthorized immigrant population will cover people from countries around the world, those born in Mexico will feel the most impact under existing and new guidelines, followed by Central Americans.

I’ve written before about the media’s failure to place as much emphasis on the online grassroots movement that mobilized behind immigration reform in 2013. While the story didn’t receive as much coverage as other politically influential online movements (most notably the Tea Party), the boldness of Obama’s actions is forcing the issue back into the headlines.

In terms of historical parallels, Obama’s executive order is a spiritual successor to Richard Nixon’s national address appealing to the “Silent Majority” in 1969. Just as Nixon used that speech to galvanize culturally conservative white voters—whose extensive grassroots campaigning was also being ignored by the media in the 1960s—and ultimately bring them into the Republican coalition, so too is Obama using his speech to persuade Hispanics and online immigration reform activists to become a stronger force in the Democratic Party.

When future scholars study this moment in American history, they will likely recall a parallel moment from nearly fifty years earlier. As President Lyndon Johnson worked to pass the Immigration and Nationality Act of 1965, which ended the racist quotas that had governed American immigration policy for the previous forty-one years, he explained, “The land flourished because it was fed from so many sources—because it was nourished by so many cultures and traditions and peoples.”

Thanks to last week’s executive order, this nourishment can continue. Perhaps it is appropriate that in addition to being America’s first black president, Obama is also the first president with an immigrant parent since Herbert Hoover. His legacy on immigration reform will likely rank alongside the economic stimulus and health care reform among his most significant legacies.