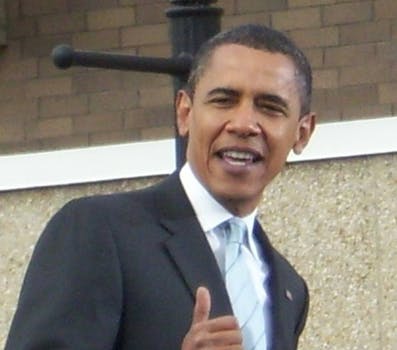 Will Obama fix the national debt with crowdfunding?

No, but CrowdTilt pulls a mean April Fools' Joke.

After decades of watching the national debt soar to astronomical levels, President Barack Obama is finally going to do something about it.

He’s going to take a cue from Veronica Mars and ask Americans to pay for it via crowdfunding.

Earlier today, the President launched Crowdfundthedebt.com, an online hub where Americans can contribute as much as they can/want to pay off the national debt, which currently stands at more than $16.8 trillion.

“Despite the best efforts of my administration,” Obama pleads on the site, “prolonged partisan debates in Congress are preventing us from a solution to our mounting national debt.”

“Instead of bickering over taxes, we’re taking a new approach: asking everyday Americans to chip in so we can pay off our debt once and for all.”

The crowdfunding effort has been endorsed by both political parties.

“I’ve vocally disagreed with the President on pretty much everything related to the debt,” Republican congressman Paul Ryan stated, “but I do like this crowdfunding thing. I mean, haven’t you heard of Crowdtilt?”

“Man, this is a great idea,” added former President Bill Clinton. “I bet this was Biden’s thing, am I right? Joe, call me.”

But perhaps the biggest supporter of “Crowdfund the Debt” is the Chinese government.

“We support this idea,” said Chinese President Xi Jinping. “Would definitely be sweet to get paid back.”

Unfortunately for any flag-waving and Star Spangled Banner-singing American looking to take a proactive approach to dealing with this serious problem, the site is nothing but a ruse.

The Daily Dot reached out to Crowdtilt to confirm that it was an April Fools’ Day joke and a representative for the company replied with a deadpan “yep.”

Sorry, America, but it looks like our country’s going to continue paying our bills by continuing to raise the debt ceiling and kick the can down the road.