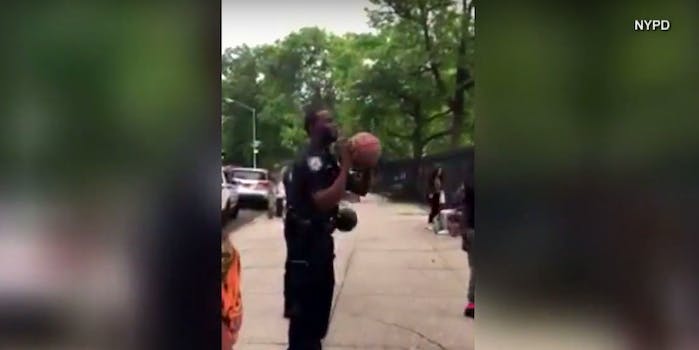 A New York City police officer just gained a new level of respect from the kids in his neighborhood—and basketball fans everywhere.

In a short smartphone video posted by NYPD’s Twitter account on Friday, a policeman identified only as Office James from NYPD’s 50th precinct tells a gaggle of kids, “We’re gonna make it,” as he lines up a basketball shot from outside the fenced court.

We aren’t kidding when we say our officers have skills!
Great job with the 🏀 & #NYPDconnecting with the community Officer James @NYPD50Pct pic.twitter.com/lE47ECArGD

Does Officer James have any relation to LeBron James? Because that’s one crazy impressive shot. The best part of the video is when the kids realize James actually sunk the ball—and we love the smile it puts on the officer’s face.

Lots of people who’ve watched the now-viral video have commented that the New York Knicks could use James’s help, but it looks like the officer is doing great work right where he is.