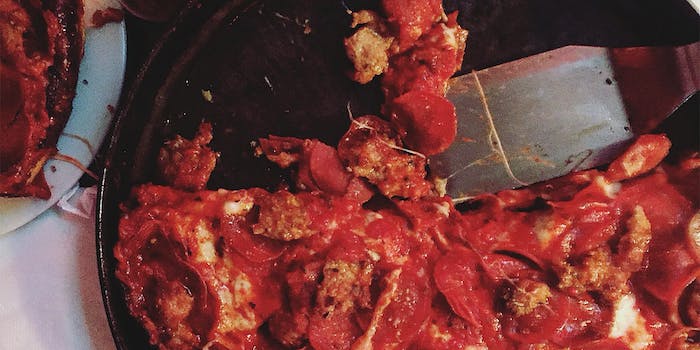 He says he doesn't want to be a 'phony.'

If you choose to work for a city, you should probably be prepared to defend every aspect of it. That means supporting its politicians, its culture, its developments, and, most importantly, its food. Especially if the city is known for one dish in particular.

But Eric Phillips, the press secretary for New York City Mayor Bill de Blasio, decided to publicly take a stand against NYC’s pizza. In a controversial tweet, he said a deep dish pizza he ate in Chicago is “the best pizza in the United States.”

This is the best pizza in the United States and it’s not close. pic.twitter.com/wnKBUjuHkl

He followed up with tweets to describe his qualifications and reasonings. He called NYC pizza “fine.”

I️’ve lived in NYC for 12+ years. The flat, foldable, salt-less pizza is fine. I️ eat a lot of it. But it’s not as good as Chicago pizza. It’s like salisbury steak vs. actual steak. Sorry.

“I don’t think anyone cares what type of pizza the mayor’s press secretary likes,” he tweeted. “I think they care more about someone not being a phony.”

Because I️ like Chicago pizza. NYC has a lot of great pizza. But I️ prefer Chicago-style. I️ don’t think anyone cares what type of pizza the mayor’s press secretary likes. I️ think they care more about someone not being a phony. Especially about pizza!

Still, people wondered why Phillips would even tweet about his pizza preferences in the first place.

I was born in New York City and live in Chicago. Don't do this. Don't go there. There are more important fights right now. You don't understand the destructive forces you're playing with or the precipice you're too close to. Also, Chicago pizza is not pizza. https://t.co/PsR0s0RAaH

What a strange way to resign. https://t.co/co5W4bSlZk

I am a third generation, born and bred Brooklynite. I have pizza running through my veins. This is possibly the worst thing a spokesperson for New York's Mayor could ever say. Chicago? Really?: https://t.co/sRXeWW10IG

Is anyone at @NYCMayorsOffice even from the area or is everyone a transplant? https://t.co/F7MeycMyju

Phillips’ boss faced criticism earlier this year for the way he eats pizza in NYC. Mayor Bill de Blasio said in a tweet that a pizza he ordered in Staten Island was “structurally sound enough to eat without a fork and knife.” Pizza, of course, should always be eaten with your hands.

I have deemed the pizza at Lee's Tavern on Staten Island structurally sound enough to eat without a fork and knife. pic.twitter.com/yddVW8aGpt

At least the mayor’s press secretary likes the city’s bagels?

NYC bagels are the best, Kurtz. I’m not an animal.