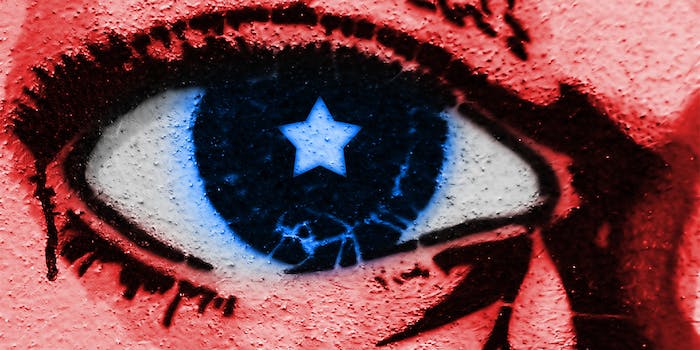 Living our lives out in the open may force society to face up to things it is too easy to ignore.

Don’t look now, but the National Security Agency is standing right behind you.

OK, not really, but they might as well be. As everyone who’s not living in an ashram now knows, the NSA has essentially been shoulder surfing everyone on the Internet for years now.

And yet… We can’t seem to muster a whole lot of concern—much to the frustration of Internet activists.

Seriously. Does it really matter?

Recently, activists staged “The Day We Fight Back,” a day of online protest designed to convince the U.S. Congress to pass laws curtailing the NSA’s surveillance activities. In contrast to the massive protests against anti-piracy (and thus anti-sharing) measures, The Day We Fight Back was less of a “fight” and more of a “strongly worded suggestion.” And the NSA remains firmly in possession of its digital binoculars.

Part of the anti-climax was the result of the fact that Internet companies were not about to be completely screwed the way they were on the eve of CISPA and SOPA. These companies don’t make their living infringing on pirated material anymore, but the onus to police piracy could have crippled them.

But the anti-climax was partly the result of the fact that a lot of people today just can’t get exercised about the NSA watching their every online move the same way they can about not being allowed to post their favorite moments in Parks & Recreation.

To be fair, the alarmists have a point.

The Internet has been one of the few places that individuals could share a dissenting opinion in the increasingly democratic-only-in-name world power, Russia. In 2012, Vladimir Putin was returned to office after four years as prime minister under somewhat suspicious circumstances. (He got more than 63 percent of the vote. Lyndon Johnson, the highest vote in the modern election system, only got 61 percent in 1964, coming off Kennedy’s assassination, for comparison.) As in the Arab Spring, protests were coordinated over social media and Russia’s security service contacted the Russian equivalent of Facebook, VKontakte, to demand protest accounts be deleted. The company refused.

In January, however, the founder of the company sold his shares to the government-sympathetic CEO of a Russian telecom. It’s a safe bet that the site is no longer a viable tool for protesters. At the same time, Russia has passed, in contrast to most of the rest of the world, strict anti-homosexuality laws. Were I a gay Russian, I wouldn’t feel especially comfortable with the nouveau KGB having access to my entire history of posts.

And yet, that fear, though legitimate, is deeply contrary to the ethos of the Internet.

Molly Soda, a popular Tumblrer, threw away some old photos when she moved—including a few nude selfies. An artist found them and they are now the focal point of an installation in a public gallery—without her pre-knowledge or permission. When she found out about it, however, she was cool with it. Commenting on her lack of concern, she said, “It’s funny ’cause I always talk about ownership and letting go of ownership once you put something on the Internet, so it’s interesting that this is happening IRL, too.”

Molly Soda’s attitude reveals how many of us on the Internet today feel. We know that our privacy is compromised online, we know that we lose ownership of ourselves on some level, and we accept that. It’s something for the privacy alarmists to think about.

In 1984, George Orwell imagined a TV that could look back at you, and which was always on. The plot turned on two people searching for enough privacy just to love each other. For some us on VKontakte, the nightmare is reality.

We say that as long as you don’t do anything illegal, you don’t have to worry about what the government knows about you. While that particular bromide ignores the possibility of abuse, what about unjust laws? Privacy is one of our checks and balances against unjust laws.

And yet, there is a social tyranny that is only possible because of privacy. We’ve all heard someone say, “I don’t care what happens behind closed doors.” The subtext is often, “but don’t stick it in my face.” That’s not tolerance. It’s willful ignorance. In the civil rights movement, it became clear that people were not going to adjust their racist beliefs until they were forced to come face-to-face, literally, with the problem when the schools were integrated.

Paradoxically, I suspect that while the lack of privacy is a true and serious danger, living our lives out in the open may force society to face up to things it is too easy to ignore, and thus make us a more just and compassionate people.