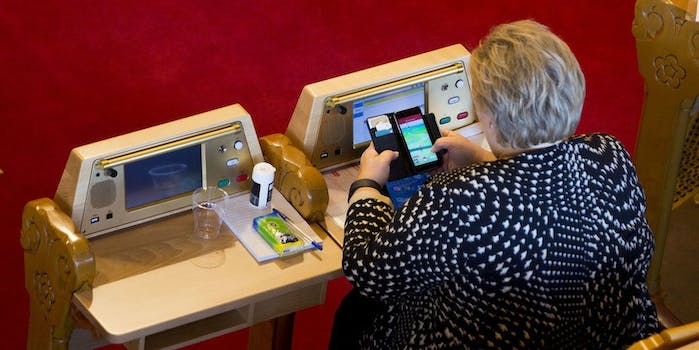 The initial frenzy for Pokémon Go has cooled off somewhat, but the addictive app’s devotees are still hard at work trying to catch ’em all. And you know that a woman of true ambition—like, say, Norwegian prime minister Erna Solberg—won’t quit until she does.

Which may explain why the head of state was caught tossing PokéBalls during a debate in the Storting, Norway’s parliament.

The smartphone scandal comes just a few weeks after another the leader of Norway’s Liberal party was seen playing Pokémon Go in parliament herself. Guess becoming a PokéMaster is something of a bipartisan issue.

One redditor notes that, according to rumor, “there is higher chance to find Porygon near government buildings, and specifically courts,” so maybe both women found they couldn’t pass up the chance to fill a critical gap in their Pokédex. In any case, they both laughed off the episodes, since Norway is apparently a chill place where politicians don’t scream at each other over nothing—and because Solberg happened to be playing while Grande herself was speaking to the legislature.

“She heard what I said, we ladies can do two things at the same time you know,” Grande tweeted, while Solberg commented, “I think that Trine will like that I opened the game while she was at the pulpit.”