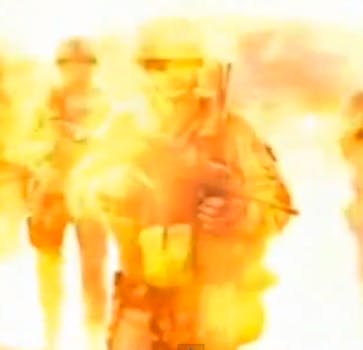 North Korea rips off another video game on YouTube

For the second time in a month, a North Korean propaganda video has been booted from YouTube for using copyrighted footage from a video game

Here’s the deal, North Korea: If you’re going to post propaganda videos of American soldiers and altruistic Americans like President Barack Obama going up in a fiery ball of flames onto YouTube, you’re going to have to learn about our country’s copyright laws.

North Korean propaganda branch Uriminzokkiri launched another cinematic attack at United States’ people and policies Tuesday, a 1:18 video that declares the autocratic country victorious in its latest nuclear testing practices and promises a world of hurt for the United States’ smooth president.

“North Korea’s third underground nuclear test!” the video declares. “Let it be known once more that this is strictly our practical counter-measure for North’s safety and to protect its sovereignty from the aggressors. It is also a solemn warning that time is no longer on the side of the United States.

“The people are watching. America should answer.”

It’s wild stuff, and altogether over the top in terms of production and exaggeration. At one point in the video, the footage actually shows a photograph image of Barack Obama entirely engulfed in a sea of orange flames while he’s walking comfortably down a runway.

The video looks a whole lot like that “North Korea Dream Video Nuclear Attack on America” video that surfaced onto YouTube earlier this month, the one that eventually got taken off the site because it ripped footage off the Activision video game Call of Duty: Modern Warfare 3.

And, d’oh—wouldn’t you believe that it happened again?!

YouTube removed North Korea’s highly anticipated follow-up to “Dream Video Nuclear Attack” early Wednesday morning, citing that “this video is no longer available due to a copyright claim by ZeniMax Media Inc.” As Jezebel reports, the crime this time was a jacking of some footage and the theme song from The Elder Scrolls IV: Oblivion, a video game owned by the Maryland-based publishing company. 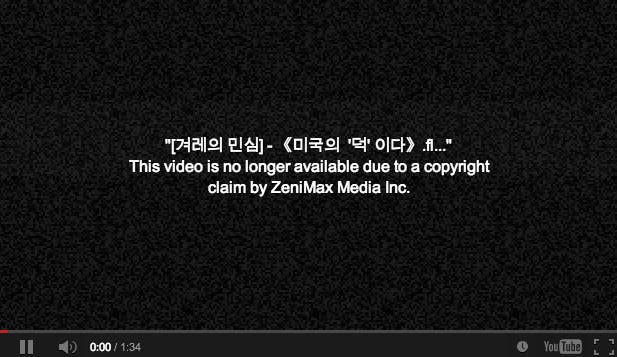 Just to review, North Korea, you cannot use an original work that’s produced and currently exists within a fixed medium without receiving exclusive allowance to do such a thing. That applies to audiovisual works, sound recordings, written works, visual works, dramatic works, and, yes, video games.

YouTube has an expensive operation called the Content ID system dedicating to sorting through things like this. It’s not perfect, but sometimes it works—especially in situations in which you’re trying to light our president on fire. Got it? Go write your own damn songs.