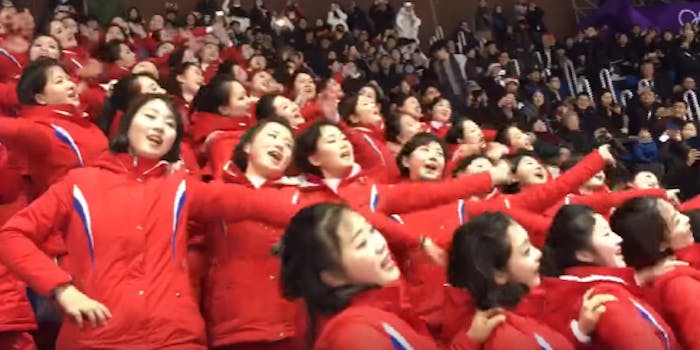 Plenty of people are reacting, and some of them aren't happy.

North Korea’s cheerleaders are drawing a ton of attention at the 2018 Winter Olympics, and it’s easy to see why. With their carefully timed, synchronized chants, cheers, and routines, it’s understandable that so many people on social media are talking about them. The mainstream media has been similarly fixated on the North Korean cheerleading squad, with numerous write-ups about their decidedly odd presence at the games.

Their cheers frequently rang out during the unified Korean hockey team’s 8-0 loss to Switzerland on Saturday, seemingly undeterred by the shellacking. Several videos of their choreographed movements and songs have gone viral on Twitter, and the Washington Post has even translated some of their words so that their meanings are more clear to an English-speaking audience.

North Korea is sending like 12 athletes to the Olympics and TWO HUNDRED AND THIRTY PROPAGANDA-TRAINED CHEERLEADERS. The pics from past events are simply beyond pic.twitter.com/33jjWWw8gZ

But given the North Korean government’s draconian and brutal policies toward dissent, and the big question of why it sent the cheerleaders to Pyeongchang―likely, to score a public relations win that obscures the country’s various, grievous human rights abuses―some people weren’t so thrilled with the positive coverage.

As someone from South Korea, all I can say is f**k North Korea, and f**k all the media outlets going gah gah over their brainwashed cheerleaders

I can report South Koreans here in Pyeongchang are not as enthralled with Kim Yo Jong and the North Korean cheerleaders as it seems some media are back home.

Something about N.K. killing, starving, & imprisoning its people while threatening South Korea with nuclear annihilation.

This.
Those aren't cheerleaders. https://t.co/RuTc4icru9

I’ve been struck by how much of the North American media has written about the symbolic unity and how it might be a start. Many of the South Koreans I’ve talked too feel incredibly skeptical about all of this, that the cheerleaders are propaganda tools to fuel a narrative.

The North Korean cheerleaders are creepy, okay? They're slave laborers, selected for their beauty, and then taught chants they perform for their Dear Leader. It's creepy you like them.

It’s worth noting that in 2005, reports suggested that members of the cheerleading team were themselves sent to labor camps, as punishment for discussing a trip to South Korea with their fellow North Koreans after returning home.

Even for the seemingly cheerful red-clad performers, living under the North Korean government poses serious and severe risks of draconian punishment, including being sent to camps reportedly rife with torture, starvation, rape, and death. This threat of harsh reprisal might help explain just how much boundless energy and seamless coordination the squad has demonstrated so far, even when the results from the unified Korean team don’t quite measure up.