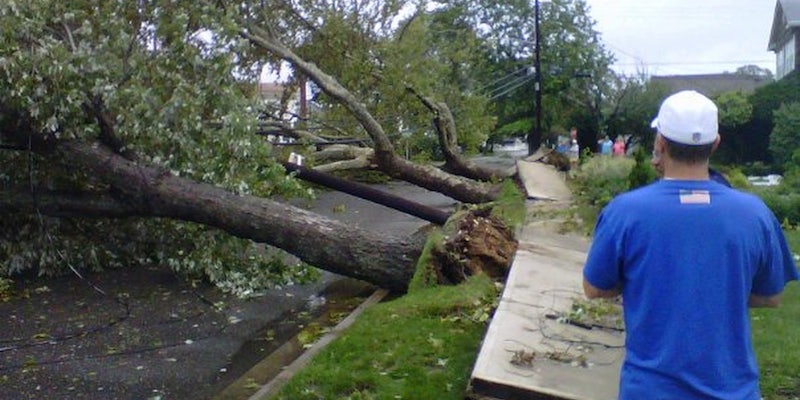 Candidate for Arizona governor wants everyone to know he bones

Noah Dyer bones. And he wants his future constituents to know all about it.

When it comes to American politics, ‘You can’t fuck and lead the free world’ is basically the 28th amendment.

In 1988, Gary Hart was the leading contender for the Democratic presidential nomination. Some fucking got in the way. Ten years later, Bill Clinton was impeached for the audacity of lying about using his dick while in office. It’s not just presidents who aren’t allowed to do it: Eliot Spitzer, Larry Craig, Mark Sanford, and countless others have had their careers ruined because they liked to get it on.

Noah Dyer has a new message for voters: It’s OK to bone.

“I think we have had a great number of politicians ruined by scandal. These were people sunk by personal matters,” Dyer tells the Daily Dot. “They were doing good things and were well loved, and it ruins [them]. I think that’s unfortunate.”

Dyer is determined to not become one of them. Not because he lives a chaste and pure life. Quite the opposite. Noah Dyer—who is running to be the Democratic nominee for governor in Arizona in their 2018 gubernatorial campaign—wants everyone to know that he fucks.

In fact, he put it front and center on his website. It’s right at the top of the nav bar. Where most politicians link to their life stories and campaign promises, Dyer has “Scandal and Controversies.”

Alongside vignettes about his beliefs on organized religion, his divorce, and his idea to record his entire life on camera to protest government surveillance, Dyer lists ‘Sex.’

“Noah has had both deep and casual sexual experiences with all kinds of women. He is an advocate of open relationships. He’s had group sex and sex with married women. He has sent and received intimate texts and pictures, and occasionally recorded video during sex. Noah has always been forthright with his partners. All of his relationships have been legal and consensual, never coercive, or abusive, and he condemns such behavior. Noah is unapologetic about his sexual choices, and wishes others the same safety and confidence as they express themselves.”

Can I get an up-top?

Speaking with the Daily Dot after several websites and Twitter picked up on his boldly proclaimed sentiments about sex, Dyer thought it just made sense.

“I’ve been honest about it all along. I have sometimes spoken openly in front of hundreds of people about my alternative lifestyle views,” he says. “Being open about it is not a new thing to me.”

So, when he decided to run for office, he felt he could do one of two things.

“It was either put this stuff front and center and talk about it now, or I would build up a bunch of political momentum and have somebody else bring it up and talk about it. Because it’s not hidden. I haven’t been embarrassed about it. I just decided to bring it up now. I am a genuine and honest person, and I want people to know things.”

It’s not just talking about boning that makes Dyer an untraditional candidate. He’s never held public office before, and despite his avowed distaste for almost all things Donald Trump, he, in a way, found a kindred type. Not in policies or temperament or attitude—Dyer is socially liberal and many times during our conversation expressed a distaste for the president—but has found that Trump tapped into something that he thinks the country craves: a need for candidates who are just honest.

Which is what Dyer aspires to be.

“When I saw the last election cycle go down, and the way it turned out, I realized a lot of things. I don’t think one in four Americans is a hardcore racist. I think [voters] were voting against a political establishment that they view as dishonest, and Trump, with all his faults, was a candidate they perceived as honest.”

That very night, Dyer said he decided to run for governor of Arizona. After weeks of researching it, he really did believe he’d have a chance at winning. Since he was ready to offer himself as a straight-shooter, he figured he should come clean about all his sex.

And hope the voters don’t care.

“Clearly, we elected Donald Trump, and he was elected by supposed conservatives. His record on sexuality was not by any means conservative. Multiple marriages, affairs, and the whole ‘grabbing the pussy’ thing,” says Dyer. “Clearly, people in America care more about honesty than traditional laws of chastity.”

More than anything, says Dyer, people don’t want to be misled. Which is why sex scandals seem to sink so many candidates.

“I think the concern of the average voter is real, that politicians [have] private policies that [are] totally opposite of their public-facing policies. That is not cool…” Dyer says. “That is the thing people are uncomfortable with. They don’t want their politicians treating them like they can’t handle the truth. Or doing shady things they don’t understand. So if, I think, that gets out of politics, it would be good.”

Perhaps he thinks that, by being open and honest, he can create a more inclusive attitude. Whether that will happen remains to be seen, but he is not all that worried about his own sexual proclivities being used against him. He thinks his support of other people who fuck may be more damaging than his own fucking.

“I’m very supportive of LBGTQ rights, and I think it’s my support of those communities that puts me in danger with voters [more] than my own sexual past,” he says.

This raises the question, if you feel compelled to speak up about your sexual past at the onset of your campaign, is it because you are worried you have candidacy-sinking skeletons in your closest?

Nope, says Dyer. He doesn’t even know what those things would be in this new world.