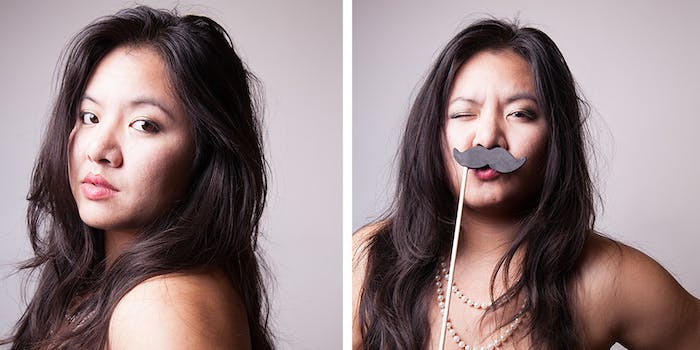 This No-Shave November, look out: Women are ready to (not) sacrifice their body hair for the cause.

It’s No-Shave November, the month when men put down their razors to let their facial hair roam free in the name of prostate cancer awareness. The very fact that many men prefer the more masculine “Movember”—a shoutout to the mustache—speaks to the fact that men think of this as a men-only event. This year, it’s time to fight back: If the name of the game is prostate cancer awareness, women should take up arms (and drop razors) as well—after all, we’d just be spreading the word.

No-Shave November, with its giggling discussions about body hair, usually brings about the same boring jokes about women’s body hair, reminding women that they should be shaved clean for the pleasure of the male gaze. Sometimes they tell us how they really feel and skip straight to veiled threats:

to the women participating in ‘No Shave November’, go spend your eternity in the depths of hell

Chicks that participate in no shave November automatically qualify for no dick December.

After years of these jokes, we might understandably see No-Shave November as an excuse that men use to grow a beard while being a jerk about it, but it really is, nominally at least, an effort to raise awareness about prostate cancer and other men’s health issues. And it’s true—the Movember Foundation does raise a sizable amount of money for prostate cancer research. But plenty of men growing beards and sporting ‘staches this fall have no idea they’re participating in an awareness campaign. Some men just want to watch the world get scruffy.

With men losing sight of the true meaning of No-Shave November, it’s more important than ever for women to drop the razor and let it grow. The Movember Foundation politely asks us to participate in the month by “supporting the men in [our] lives” without growing a mustache ourselves, but we don’t have to play the part of the perfect pussy-shaving housewife in order to support prostate cancer research. We can turn ourselves into the human Chia Pets of men’s nightmares with flowing ‘70s bushes, bristly leg hair, and yes, even little mustaches (and no, cute costume mustaches from American Apparel don’t count) while also raising awareness about men’s health—and, dare I say it, supporting the men in our lives by not shaving in solidarity.

Women participating more visibly in No-Shave November could be the best thing to happen to an annual tradition that’s becoming increasingly tiresome. For one, we bring our perspective as people who know what it’s like to be targeted by a health awareness movement that deliberately plays up stereotypes about our gender. Every October, during Breast Cancer Awareness Month, we get the message that we’re all just walking pairs of “ta-tas” that need to be saved or, in other words, that our bodies are only worth fighting for if they can be sexualized. And the pink ribbons that get plastered onto every gizmo and granola bar under the sun have become so ubiquitous that they’re meaningless and perhaps even untrustworthy.

For many men, No-Shave November is becoming the rough equivalent of our experience in October, the other piece of bread on the sandwich of gender stereotypes that gets served to us every fall. What seems at first glance like an innocuous way to encourage prostate cancer screenings is actually a questionable campaign with some uncomfortable messaging. In October, we assume that we have to sexualize women to get people to care about women’s health and, in November, we assume that the only way to persuade men to care about their health is to make it cool, masculine, and even edgy to do so. The website for the Movember Foundation, for example, invites men to be a “Mo Bro” and treats mustaches with the sort of half-joking reverence that only confirms that mustaches have, in fact, become the status symbol du jour and mark of masculinity for the modern man.

For men who don’t want to be a “Mo Bro” and who feel confused by the way in which male homosocial bonding uses communal hair growth to talk about serious health problems instead of using, you know, words and feelings, No-Shave November can be an isolating month. And that’s precisely where we can come in, as hairy women. By letting it all grow out, we can help these men put the implicit chest-beating undercurrent of No-Shave November to the test: Any man who tells us that the month does not apply to women apparently cares more about enforcing traditional gender roles than he does about taking care of his own prostate. To be fair, some men manage to go the whole month without body shaming women and good for them—we’re not looking for a fight. But enough men act like jerks during No-Shave November—even by putting down other men who can’t grow mustaches—that a little fuzzy intervention on our part would probably be healthy at this point.

And besides, if men truly want to raise awareness for important health issues, few things are more attention-grabbing than women’s body hair. When Madonna showed off her armpit hair on Instagram earlier this year, for example, the Internet collectively vomited all over her as if she had committed a crime against nature. And gossip bloggers like Perez Hilton are always ready to call out “famous females who forgot to shave.” Lindsay Lohan showing a bit of leg hair at an event? Scandal! Drew Barrymore dares to have armpit fuzz? Preposterous! Tyra Banks didn’t wax her upper lip? Horrors! When it comes to something like prostate cancer awareness, all press is good press and women having body hair, for better or for worse, is still something that’s seen as newsworthy.

But maybe women’s participation in No-Shave November could also help diffuse the paparazzi’s interest in Julia Roberts’ furry legs by normalizing women’s body hair. As Ellen Friedrichs writes for Everyday Feminism, the taboo against women’s body hair constricts women’s possibilities for gender expression, especially along lines of race and class. By giving men an excuse to speak up about women’s body hair, No-Shave November often unwittingly reinforces this taboo along those same lines, hence the repugnant and not uncommon joke that “Muslim women [are] showing support for Movember.” Similar policing can be seen in treatment of devout Sikh women, who don’t cut any of their body hair, even when medical conditions cause significant hair growth, including that of facial hair. When we allow facial hair to be seen as the exclusive territory of men, we accept a world of constricted possibilities for women. But if we participate in No-Shave November, we can keep those possibilities open while also keeping our legs just a teeny bit warmer.

And the policing of hair doesn’t just apply to women, either. Men experience the world of body hair differently if they fall outside of the bracket of privileged white men who most frequently participate in No-Shave November. Riaz Sayana-Mulji, for instance, observes in his moving open letter “Why I Don’t Participate in Movember” that he’s “already been called a ‘terrorist’ enough as a clean-shaven, brown-skinned young man.” For him, “the idea of growing more facial hair [in November] was out of the question.” In an Islamophobic and sexist world obsessed with very restrictive notions of masculinity, facial hair is fundamentally political and those who participate in No-Shave November aren’t always equipped to tackle those issues with delicacy and respect.

So whether you do it for yourself or for the men who don’t want to be “Mo Bros,” consider throwing out your razor for the rest of the month. We can have our cake and eat it, too, by showing support for men’s health while also interrupting the sexism and racism that often surround No-Shave November. And we can still raise money for prostate cancer research while refusing to be sleek and subservient seals for the cause.