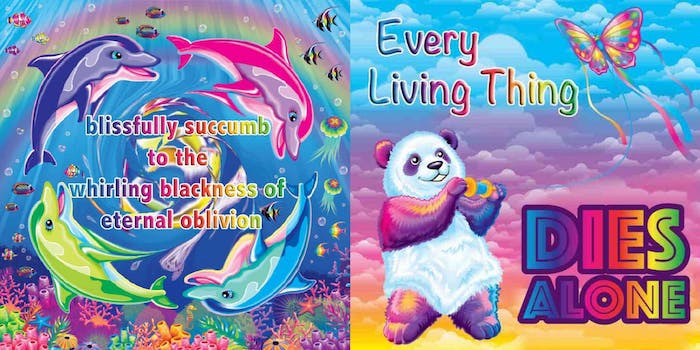 “Sometimes life isn’t all rainbows and butterflies” takes on a whole new meaning when it comes to Nihilisa Frank, the latest Tumblr to remix Lisa Frank’s iconic glittery artwork.

By combining the sparkly unicorns of Frank’s illustrations with the principles of nihilism, this Tumblr produces some of the best comedic juxtapositions on the Internet.

Fans can submit their own melancholy messages by emailing [email protected].  This isn’t the first time that Lisa Frank has been remixed. Feminist Lisa Frank was all the rage earlier this year, dismantling the patriarchy with the help of radical mermaids and kittens that were totally over misogyny.

There’s definitely something appealing about combining the cutesy imagery of Lisa Frank with messages about gender equality or cynicism,—turning something fruity and sparkly into something much darker. We as a society also seem obsessed with transforming everything nostalgic these days, like reimagining Disney princesses or those crazy theories about cartoons.