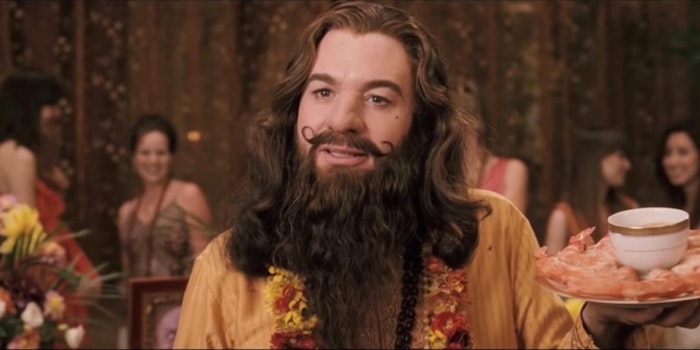 We talked to the man who delivers 'Patch Adams' bucket hats and 'Sleepless in Seattle' swag to your Twitter feed.

Nostalgia isn’t always as pretty as we remember.

Alongside pornography and anger, nostalgia is one of the internet’s greatest exports. From BuzzFeed lists counting down the hottest television characters from your childhood to Facebook’s various intrusive flashback features, on the internet, nostalgia reigns supreme.

One Twitter creator looks at nostalgia and doesn’t see something fuzzy and warm, but rather something odd, weird, and even sad.

Julio (he asked the Daily Dot that we not use his last name), is behind several of your favorite nostalgic Twitter accounts. On social media, he looks at the not-so-old Hollywood era of the ’90s and early 2000s, when films like The Love Guru, Wild Hogs, and Patch Adams were being foisted on an unwitting public, and brings us visual artifacts from that strange time.

His newest account, “Movie Promotional Merch Unlimited” (@NightPromoting), shows us the branded merchandise that was used to promote the films of yesteryear. His previous account, @NightOpening, which has now migrated to Instagram as “Movie Premieres Unlimited” (@nightopenings), showed us the tragic fashion choices from movie premieres past as captured by Getty Images in all their bucket hat and velour tracksuit glory.

“Honestly, both accounts are one big, ‘Did you know this happened? Well, you should,’” Julio tells the Daily Dot. He “went [his] whole life not knowing Jason Alexander showed up in all green to the premiere of Shrek,” and he doesn’t want that for the internet denizens of the future.

He jokes that his accounts are “a very small service to humanity.”

“I’m not the first person to post photos of premieres or ridiculous merch, but I think creating an interactive directory is a nice way to just appreciate the absurdity that is cinema and marketing,” he adds.

If you look at Julio’s accounts closely, he likes to feature a certain type of film that may not be so well-loved today: crass low-brow high-concept comedies and big-budget action cash-ins. He cites Cinnabon X Love Guru and Taco Bell X Batman Forever as two of his favorite brand integrations.

In the short time he’s been running the movie merchandise account (he created it in August), Julio has posted promotional swag from dozens of films. Julio’s favorite pieces to date have been a “USB drive shaped like a grenade from A Good Day to Die Hard” and “Howard Stern’s Private Parts hat with wing combo.”

Julio finds merchandise for films like The Love Guru, which did not do well at the box office, particularly funny.

“I’ve posted a lot of promotional stuff for The Love Guru, a film that by all accounts was a flop, so any merchandise for that movie has a sense of the calm before the storm,” he says. “It’s funny in hindsight to see magnets and Cinnabon promotional T-shirts for a movie that did not succeed.”

Overall, his posts explore the less romantic side of advertising. “Essentially I want to undo all the work of Mad Men: if it took place in the ’90s, Don Draper would be working for Coca Cola battling it out with Pepsi to who has the rights to get Phantom Menace characters on their cans,” he says.

Fans of @NightOpening might be curious as to why the account was banned from Twitter (though he is still on Instagram). Julio says he received several DMCA violations for his posts, which often used Getty images. “My guess is I got one too many violations and that was it. I am still in the process of appealing it…All I wanted to do was provide people with some great photos of Jason Alexander. I never removed watermarks and always credited the photographers. Sadly, I can’t afford the $500 for a six-month license to post one Pauly Shore image in the lowest image resolution.”

Finally, the Daily Dot asked Julio if more Twitter projects are in the works. He assures us that his fascination with recent Hollywood history isn’t waning, but for now, he is keeping his cards close to his vest.

But wee can certainly expect more social media work from him because, for Julio, mining nostalgia for humor is a labor of love.

“Creating Twitter accounts isn’t exactly high art,” he says, “but when people are appreciative of it there’s a feeling of satisfaction.”