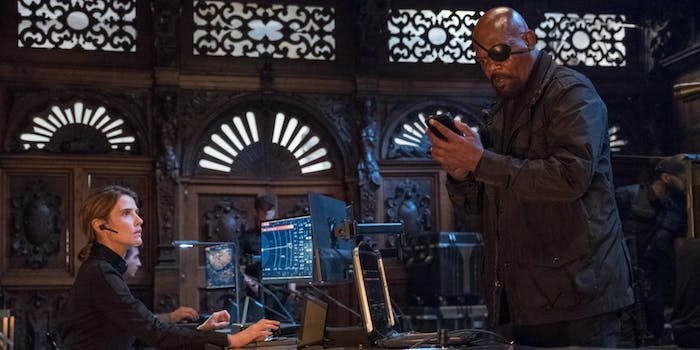 After spending more than a decade as one of the core connective tissues in the Marvel Cinematic Universe, Nick Fury is finally getting the chance to spread his own wings.

Variety is reporting that Samuel L. Jackson, who’s played Nick Fury in 11 Marvel films and Agents of S.H.I.E.L.D., is set to star in a Disney+ TV show about the S.H.I.E.L.D. director. Kyle Bradstreet is set to write and produce the series.

Ever since Nick Fury walked to talk to Robert Downey Jr.’s Tony Stark about the Avengers Initiative, Nick Fury (as played by Jackson) has played a masterful role of puppet master and manipulator, largely behind the scenes. He was responsible for getting the original Avengers back together and he faked his own death in Captain America: The Winter Soldier to throw H.Y.D.R.A. off his tail. While he was among those who vanished from Thanos’ snap in Avengers: Infinity War, he managed to call Captain Marvel on a pager before he disappeared.

His two most recent outings—Captain Marvel and Spider-Man: Far From Home—gave Nick Fury and Jackson himself much more to do. In Captain Marvel, we catch bits and pieces of Nick Fury’s origin story including how he met one of the MCU’s first superheroes and how he famously lost one of his eyes. In Far From Home, he appeared to be calling the shots, but the post-credits scene revealed that the Nick Fury we saw throughout the entire film was actually the Skrull Talos (Ben Mendelsohn) in disguise while the real Nick Fury was somewhere out in space.

No other details about the Nick Fury Disney+ TV show have been revealed. But as far as time or location goes, the character of Nick Fury has chronologically been part of the MCU for decades, so it could be on Earth or in space; he could be working for S.H.I.E.L.D. or on the run.

The Nick Fury series marks the eighth Marvel series in some form of development at Disney+; other series include Falcon and the Winter Soldier, Loki, Hawkeye, She-Hulk, Ms. Marvel, and Moon Knight. The first Disney+ and Marvel collaboration, WandaVision, is set to debut later this year.