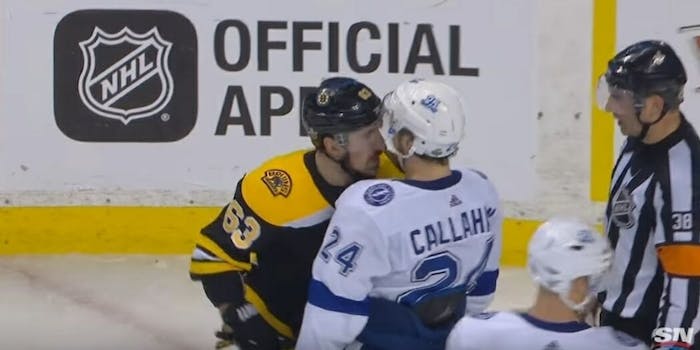 There’s an NHL player named Brad Marchand, and he likes to lick his opponents

Watch out NHL players: There’s a serial licker among you.

His name is Brad Marchand, and he plays for the Boston Bruins. And apparently, he has a taste for human flesh.

It’s the second time Marchand has licked an opponent during the postseason, and understandably, fellow hockey players aren’t enjoying it.

Marchand later defended himself by saying Ryan Callahan, the unfortunate man who was licked, had hit him in the face four times previously. But Tampa Bay Lightning coach Jon Cooper said, via the Boston Herald, “There is absolutely no place in our game for that. I don’t get it, I don’t understand it.”

The internet seems to mostly agree. People also made plenty of jokes.

Another nickname to add to Brad Marchand's extensive list: Oral B

Ryan Callahan on being licked by Brad Marchand: “I don’t know what the difference is between that and spitting in someone’s face.”

If Brad Marchand tried to lick me I would full blown make out with him. Call that pussy’s bluff.

Brad Marchand was that weird kid in elementary school who would eat boogers for a dollar. pic.twitter.com/bPYlw8RzEX

It also led to this all-of-a-sudden relevant question. What’s the difference between Marchand and DJ Khaled? Here’s how one Twitter user answered.