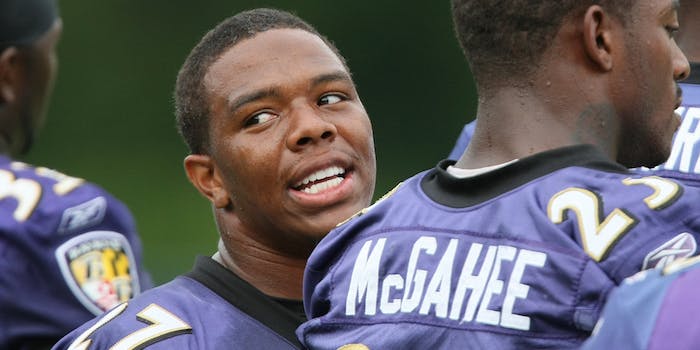 Is America’s crisis of masculinity playing out in its favorite sport?

This could forever change the game of football as we know it.

The Ray Rice scandal has lifted the lid off the NFL like never before. And it raises a very important question: Is it a coincidence that the NFL is more popular than ever, with the Super Bowl as the ultimate national event, at the same time that many American men are in the midst of a masculinity crisis—and that now we’re seeing that crisis playing out literally within the NFL itself?

Women are asserting themselves, roles are changing for men and women, and the gay and transgender movements are challenging sexuality and gender as well as challenging the definition, and even the idea, of masculinity. Is it really any wonder that many more straight men—as well as many women, judging by the statistics of who the newest fans are—may be confused and threatened about these changing roles, flocking to an institution that is a citadel of well-defined, old-fashioned masculinity, where the men are real men and women stand behind them, cheering them on? If masculinity were a religion, after all, the NFL would be its Wahhabism or Christian Dominionism.

Two weeks ago I pointed to the virulent homophobia of the NFL, where Coach Mike Priefer of the Vikings was given a mere two-game suspension (now back in the game) for saying gays should be rounded up and put “on an island and nuke it until it glows,” while the first (and only) openly gay player was drafted much later than predicted in the rounds and then passed over for a roster, only picked up for a practice squad.

And while Ray Rice was suspended indefinitely—only after a video surfaced showing more graphically what we knew before about his pummeling of his then-fiancée in an elevator—there are many other cases of domestic abuse of women and now child abuse, in which players see few if any ramifications from the NFL.

Let’s be honest: Professional football, perhaps more than any other male team sport, is based on misogyny and homophobia, built on it from the ground up. Entire generations of American men have been raised on the idea that if they don’t participate in male team sports, they’re maybe a little faggy, and football, as surely the most aggressive of male team sports, is the holy grail if you want to prove you’re not.

Entire generations have grown up—and, in many cases, still grow up—with it being routine for high-school and college football coaches to demean the players during training by calling them “girls” or “ladies” if they don’t perform well, or even going further with “pussies” and “pansies.” And what are these terms really all about? The idea that women are less than men, that being less than a real man, and being a like a woman is being like a homo, which is the worst thing you can possibly be.

Women and LGBT people are challenging this demeaning behavior and have even successfully stopped it in many places. Masculine identity as defined for generations, however, is so culturally powerful that it cuts across class and race boundaries—bonding men of all kinds together—and seems to be only becoming stronger as the American crisis in masculinity escalates.

I’ll never forget when I went on the floor of the New York Stock Exchange in the ’90s for the first time—back when their was a trading “floor,” before most trading became electronic. Everything crystalized for me when I looked down at this largely straight male world: blue-blood WASPS running the show mixed with the traders on the floor, the working-class guys from Staten Island and Brooklyn scrambling back and forth, all bonding on winning and making money.

And isn’t that what professional football is all about for many who run the game: winning and making money, no matter what racial or class background you come from? Is it any wonder, then, that NFL Commissioner Roger Goodell, who earned $105 million in five years, connects with and tacitly if not publicly defends the players who, even if they went a little too far (in his mind), are simply protecting those boundaries of masculinity for all men, punching back against the onslaught of women and homosexuals demanding equality?

Before you say, “Hey, wait, I love football, and I’m not a monster!”, let me be clear that I’m not making a generalization regarding all the fans. It’s a broad and interesting game that attracts a diverse audience, many for healthy and productive reasons. Indeed, many gay men and a great many lesbians are fans—although Rachel Maddow acknowledged the other night that, though she’s long been an NFL fan, she can no longer watch the game after the recent response to Rice’s domestic assault.

Like any national phenomenon, I think there are different ways that people participate and connect. It’s sort of like the way I might watch the brilliant phenomenon of The Sopranos or Martin Scorsese‘s Goodfellas and the way a would-be gangster from my old neighborhood might watch them.

But now something’s become too real and raw, hence Maddow’s response. The only way to change professional football is at its foundation, transforming the culture in our schools and what defines masculinity—and what defines being a girl or a woman or gay or transgender—and, most importantly, that needs to happen within sports programs, not separate from them. That’s likely to take a long time and may be utopian, since it could actually forever change, or even end, the game of football as we know it.